Days Of Our Lives Spoilers: Kate Admits To Threat, Is She Helping Philip Frame Brady? 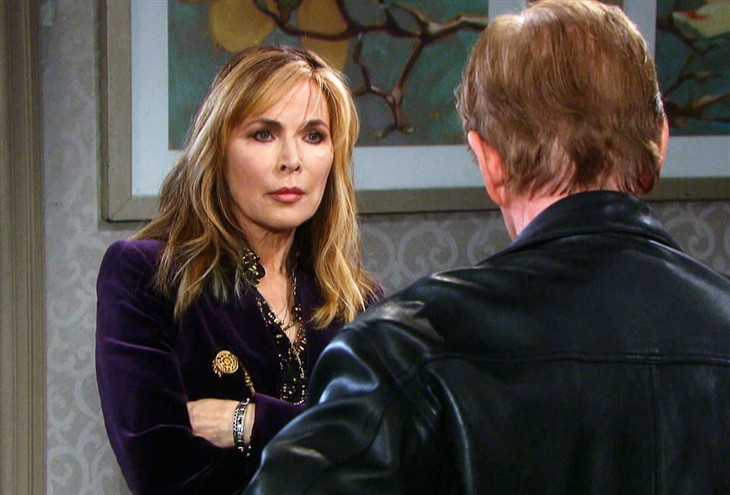 DOOL spoilers reveal that after Brady is attacked, Philip and Chloe Lane (Nadia Bjorlin) go to check on their special tree. That is when Chloe finds someone destroyed it and Philip conveniently finds Brady’s inscribed watch. When Chloe finds Brady boozed up and covered in blood by the riverbank, Philip vanishes.

The blood will be confirmed by Kayla Johnson (Mary Beth Evans) as not belonging to Brady. The blood type is the same one as Philip’s, though. Then, Chloe calls Philip only to have the ringing come from Brady’s pocket, which he can’t explain. Later, Philip remains missing and a knife is located near where Brady was found. Then, Philip’s prosthetic leg is discovered, leading Shawn Brady (Brandon Beemer) to interrogate Brady.

During the week of December 6, Kate and Roman will enjoy some romance when they get a visit from Rex. Kate ends up making a confession to both Rex and Roman. Kate tells them that she threatened Brady.

Meanwhile, Brady insists he didn’t have a drop to drink even though lab tests prove otherwise. Plus, Brady claims to have no memory of the day Philip disappeared, but everyone has their doubts.

Days of Our Lives spoilers reveal that Brady was knocked unconscious with a crowbar. So, that accounts for the memory loss. However, nobody realizes that Brady was knocked out. Eventually, Chloe will try to help Brady remember details from that day. Will Brady remember key details that could explain this mystery? It is suggested that Philip might be framing Brady. Unfortunately, the missing person’s case quickly turns into a possible homicide investigation.

Shawn will continue to be baffled when a lot more evidence is discovered, which all point to Philip’s murder. In the winter promo, Kate sobs as she insists that Brady murdered Philip.

However, could this all be an act? Is it possible that Philip is framing Brady with a little help from his mom? Kate certainly has done her fair share of schemes and manipulations over the years. Plus, with her telling Rex and Roman that she threatened Brady, it could push her smack in the middle of the police investigation.

What do you think happened to Philip? Is Brady being framed and could Kate be a part of the scheme? We will have to keep watching the NBC soap to find out!