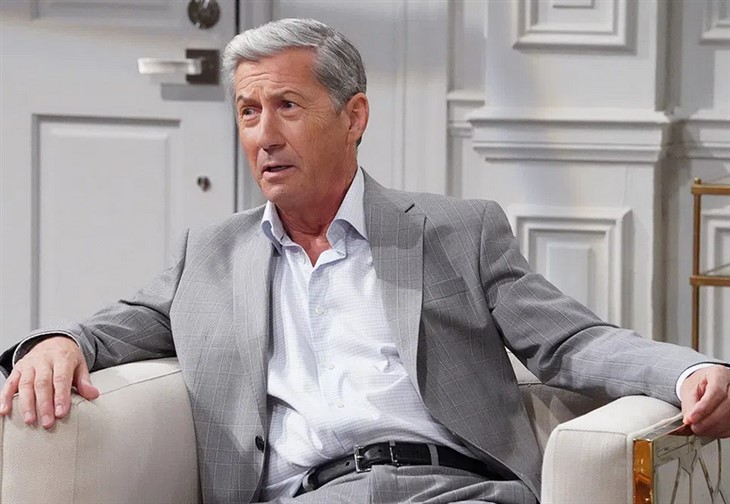 General Hospital (GH) spoilers tease that “Uncle Victor” Cassadine (Charles Shaughnessy) apparently may be trying to charm his way into the heart of Ava Cassadine (Maura West) in this week’s General Hospital Sneak Peek. Or, perhaps, she’s charmed her way into his!

General Hospital viewers will recall that “Uncle Victor” is actually the great-uncle of Nikolas Cassadine (Marcus Coloma), being the youngest brother of his late grandfather Mikkos Cassadine (John Colicos). It was recently revealed to General Hospital viewers that during the five or so years that Nikolas had been presumed dead after Valentin Cassadine (James Patrick Stuart) shot him, and he fell out of a window of the Cassadine compound on Cassadine Island, Victor was the one who helped him stay hidden and nursed him back to health. Effectively, Victor helped Nikolas continue to fake his death.

Victor has come for a visit at Wyndemere Castle, where he is talking to Ava and Nikolas, but more specifically to Ava. However, he greets them both and addresses Nikolas as he talks about their very interesting Thanksgiving holiday at Alexis Davis’ (Nancy Lee Grahn) home. Victor talks to the couple, telling them with everything going on at Natasha’s—correcting himself and calling her “Alexis”, that he hadn’t had a chance to get acquainted, focusing in on Ava. Nikolas looks just a tad wary.

As Victor continues to focus in on Ava, extending his hand towards her for a handshake, she smiles and takes his hand. General Hospital viewers will note that Nikolas continues to look just a little uncomfortable, crossing his arms and looking downwards. Ava tells Victor that there’s no time like the present, referring to their getting better acquainted. Victor tells her she’s quite lovely, and that his nephew is a lucky man, smiling as he turns his gaze on Nikolas.

Nikolas responds, telling Victor that not only is his wife beautiful, she’s smart, classy, and above all else she’s patient with him when he fails to live up to her expectations. Nikolas smiles at Ava, who asks Victor to what do they owe the pleasure of his visit? Victor tells her it’s just some business that he needs to discuss with Nikolas. Ava looks inquisitive, and asks, “Oh? Pertaining to what, Mr. Cassadine?” General Hospital viewers undoubtedly wonder as well!

General Hospital viewers will see Victor become all charming at this point, calling Ava “my dear” and telling her let’s not be so formal. He smiles, and tells Ava to call him “Uncle Victor” or at least “Victor”! Victor reminds them that they are family after all, and tells her that she has especially endeared herself to him, because as he understands it, he has her to thank for his freedom! Ava smiles and looks impressed, but Nikolas looks a little confused!

General Hospital viewers may be a bit confused as well, since it was Scott Baldwin (Kin Shriner) who approached Victor to represent him so he and Victor could go to Cassadine Island and rescue Liesl Obrecht (Kathleen Gati) – which, of course, Victor was nowhere to be found. No one knows where he was when he got released from jail!