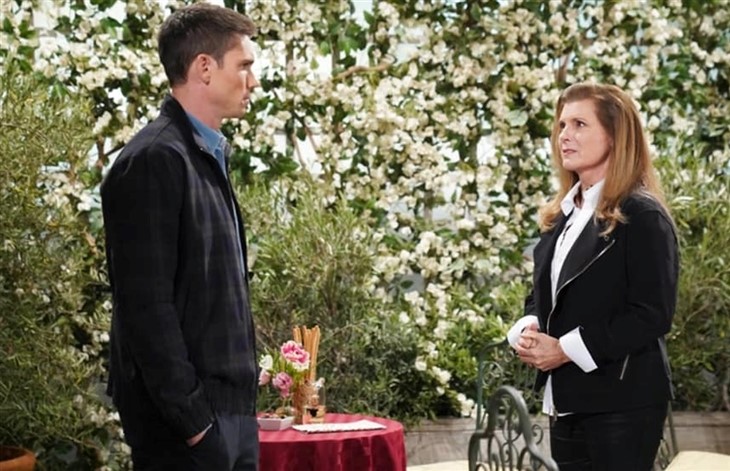 The Bold and the Beautiful (B&B) spoilers document that Sheila Carter’s (Kimberlin Brown) frustration caused her to visit John Finn Finnegan (Tanner Novlan) at his hospital office. She did not know that he praised her in front of Steffy Forrester Finnegan (Jacqueline MacInnes Wood) earlier that day.

Sheila is making inroads but has not realized that due to her lack of regular contact with Finn. However, he recognizes that Sheila’s pushing Jack Finnegan (Ted King) forced the needed truth to come out.

The Bold And The Beautiful Spoilers – Jack Finnegan Made Hard Choices

Jack could have remained silent. Sheila kept their secret since she was carrying their son in her womb and showed no sign of wanting to expose it.

Finn asked her several times about his father, and she demurred. Jack’s recent meeting with Sheila at the ever-popular Il Giardino coincided with Finn arriving.

Father and son did not meet, but Finn’s ask about his parental backstory led to Sheila telling Jack that he should admit the truth. King’s character told Li Finnegan (Naomi Matsuda) and Finn shortly thereafter. Hard, but right choices.

Sheila will blow whatever goodwill she is developing with Finn if she targets Steffy. Wood’s character has every right to be leery of Sheila, based on the multiple crimes that she committed in the past.

Finn will reject any bashing of Steffy. Sheila should realize that the slow and steady turtle can win the race. Behaving like a wild bull could easily destroy the maternal feelings Finn has.

Finn thought he had one family growing up. But he had two, with Jack and Sheila representing his birth parents. Sheila was out in the daytime world, sometimes on B&B and sometimes on The Young and the Restless, during the years she was Finn’s unknown biological mother.

Now, Finn has other families to consider. Sinn is his main focus.

The Bold And The Beautiful Spoilers: Deacon Chases His Dream Of Being With Hope And Brooke https://t.co/RrcPHLB08i pic.twitter.com/eIA4RdYtZs

Steffy and Hayes Forrester Finnegan (Samantha Worden and Piper Harriet) are Finn’s connections to the Forrester family. Plus, Kelly Spencer’s (Avalon and Colette Gray) place among Steffy’s children means Finn is connected to the Spencer family.

The Finnegan’s, Forrester’s, and Spencer’s will not instantly accept Sheila. Most or maybe, all connected family members may always think of Sheila as a dangerous force. But she is Finn’s mother, and that connection gives Brown’s iconic character a chance, which Novlan’s character realizes.