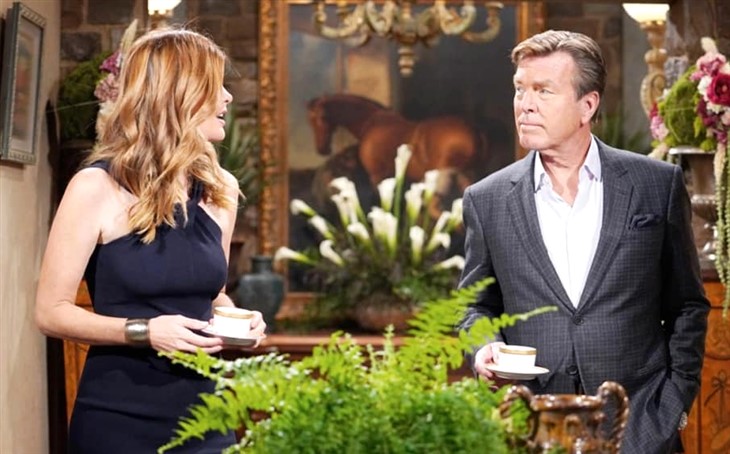 The Young And The Restless Spoilers – Jack And “Red” Have Been Taking A Second Look – Or Is It A Third Or Fourth?

Longtime viewers of The Young and The Restless will recall that Jack and “Red” have been taking a second look- or is that a third – in recent episodes of The Young and The Restless. Jack and Phyllis have been married twice, the first time from 2001-2004 and the second time from 2015-2016. They divorced for the first time when Phyllis cheated on Jack with Nick Newman (Joshua Morrow) and found herself pregnant with Summer Newman Abbott (Hunter King).

At first, they didn’t know whether Jack or Nick was her father but DNA tests told the tale. When Phyllis went into labor in an elevator, Jack wound up delivering baby Summer! The second time they divorced it was Jack who had cheated on Phyllis, with a woman named Kelly Andrews (Cynthia Watros, later Cady McClain). Recently, Phyllis learned that Jack still had feelings for her – and she very quickly started finding fault with Nick, who she had been back together with for over a year! So it looks like once again, Phyllis has bounced back from Jack to Nick!

Y&R Spoilers – The Dance Of Flirtation

Viewers of The Young and The Restless have noticed that the dance of flirtation has once again kicked up its heels between Jack and Phyllis! They have both insisted they were still just good friends when the way they have looked at and acted around each other says otherwise! Phyllis started becoming territorial over Jack when she saw him and Sally Spectra, (Courtney Hope) the new redhead in town, getting cozy!

Phyllis as well as Summer immediately began checking Sally’s past out and making sure that Jack knew what a nutcase she’d been back in Los Angeles! Viewers of The Young and The Restless will remember how that all came out! Sally had wanted Summer’s job, but it turned out she did her a favor by referring her to a famous Italian designer – although Phyllis and Jack would have preferred that their children, who are now married, would have not moved overseas! But it’s been all good. It could have seemed a little awkward to reignite their romance with Kyle Abbott (Michael Mealor) and Summer supervising!

Viewers of The Young and The Restless will see that Jack and Phyllis finally admit they are still into each other, and still have feelings for each other that are considerably more than friendship! Jack and “Red” decide that maybe the third time will be a charm and they’ll give it another go around. Maybe now that they are older and wiser they can make a relationship work and last. If Phyllis hadn’t cheated with Nick the first time around, maybe they still would have been together and celebrating a bunch of anniversaries!

The Young And The Restless Spoilers: Victor Newman Bullying Billy – Can Jill Save Son?https://t.co/RSJdX43QHo

They decide to keep things to themselves at first, especially since Nick is pretty upset. He feels like an outsider with his own family, and seeing Phyllis with Jack already will only make things worse for him, as viewers of The Young and The Restless can imagine. Maybe Jack and Phyllis will prove that the third time’s a charm, although that sure didn’t hold true for Phyllis and Nick by any stretch of the imagination!