Days Of Our Lives Spoilers: Roman And Kate Get A Surprise Visit From Rex Brady 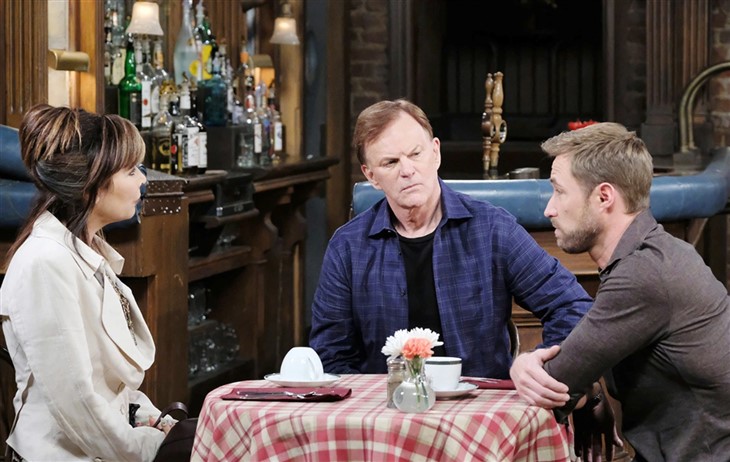 Days of Our Lives spoilers tease that Roman Brady (Josh Taylor) and Kate DiMera (Lauren Koslow) will get a surprise visit from their mutual son Rex Brady (Kyle Lowder) in an upcoming episode of Days of Our Lives!

Days of Our Lives viewers will recall that Kate has several children, Rex, Lucas Horton, (Bryan Datillo) Philip Kiriakis (Jay Kenneth Johnson) and Billie Reed (Lisa Rinna) and Austin Reed (Austin Peck) plus Rex’s twin sister Cassie Brady (Alexis Thorpe). Longtime Days of Our Lives viewers will remember that Rex and Cassie came to be in an unusual way and were called “The Gemini Twins”.

They were found during a meteor shower and at first were thought to be aliens, until it was discovered that Stefano DiMera (Joseph Mascolo) had tried his hand at test tube babies, as they were called in those days, having combined genetic materials from Roman, who he had held captive at the time, and Kate.

Rex hasn’t seen his parents recently, and as Days of Our Lives viewers will recall from recent episodes, Kristen DiMera (Stacy Haiduk) got him a job –without him knowing she was behind it – with Doctors Without Borders, in areas with little or no cell phone coverage. As far as anyone knew he and Sarah Horton (Linsey Godfrey) were living happily ever after in Chicago!

Days of Our Lives viewers know that Roman and Kate have gotten off to a rather jerky and erratic start in their renewed romantic relationship with each other! They were only married a couple of years but both of them seem like they’ve had a torch for each other for quite some time. Kate was the last woman that Roman was married to and the last woman he was involved with, although she’s moved on several times since being involved with him!

Days of Our Lives viewers will recall that they’ve flirted and danced around their feelings for one another for a couple of years now, and finally the night they settle down for a romantic evening, Rex is liable to drop in! When he does, Roman and Kate will learn some things that will likely get Roman’s cop brain to ticking!

Longtime Days of Our Lives viewers will recall that he was Salem Police Commissioner at one time. For one thing, they’ll find out that he’s not been in Chicago, and Sarah Horton (Linsey Godfrey) is not back together with him, in spite of the texts that Maggie Kiriakis (Suzanne Rogers) had been getting! Kate may alert also, considering she also had been impersonated around that time by Kristen!

Days Of Our Lives Spoilers – Rex Brady Will Be In Town For A Few Days, And Both His Parents Will Make Discoveries About Their Other Children

Days of Our Lives spoiler tease that Rex will be in town for a few days, and both of his parents will make discoveries about their other children! Roman had not realized, as had anyone else, that his daughter Sami Brady DiMera (Alison Sweeney) has been missing – but soon the news will reach him, as Kate’s son Lucas will rush to rescue her from her kidnapper!

Then, later in the week Kate will be bereft when she realizes Philip Kiriakis (Jay Kenneth Johnson) is missing, and may be dead! Rex will find out Sarah has been missing as well, by the time he encounters Xander Cook (Paul Telfer) who will ask him where Sarah is! It sounds like Rex might hang around for a bit, with Kate and Roman both having situations with others in the families!