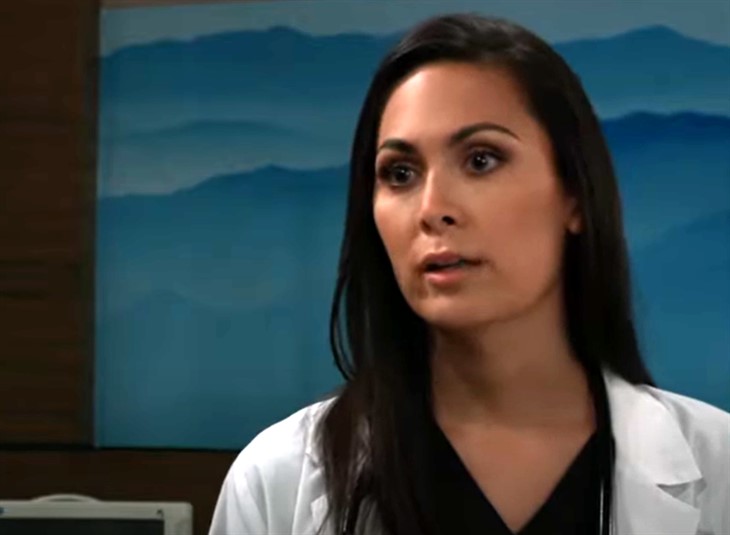 General Hospital (GH) spoilers and updates tease Dr. Terry Randolph (Cassandra James) wants the best for her friends. Terry has been concerned about her friend Elizabeth Webber Baldwin (Rebecca Herbst). Liz has been trying to find a way to move on after losing her husband Franco Baldwin (Roger Howarth). Terry has wanted her friend Dr. Portia Robinson (Brook Kerr) to keep the love that she has found in her life. Terry wants to help Liz and Portia to be able to have love in their lives.

Terry and Liz have been close friends for years. Terry has wanted Liz to be able to find a way to get past her grief over losing Franco. Terry believes that Liz should find a new love with Dr. Hamilton Finn (Michael Easton). Liz has gotten close to Finn because she has helped him to deal with many problems.

General Hospital Spoilers: Willow Has To Decide Whether To Keep Devastating Secret From Michael!

Liz helped Finn to find a way to save his brother Harrison Chase (Josh Swickard) when he was accidently poisoned by Peter August (Wes Ramsey). Liz kept the secret that Finn and Peter had gotten into an argument which resulted in Finn believing that he had ended up killing Peter. Liz was relieved that Finn had not killed Peter because she had not wanted him to get into trouble. Liz and Finn have spent time together with their families. Liz has started to want to have more from her relationship with Finn. Terry may advise Liz that she should take a chance at love again with Finn.

Terry has wanted Portia to have a committed relationship with Curtis Ashford (Donnell Turner). Portia has been helping Curtis to deal with issues that he is having with his family. Curtis has found out that his father Marshall Ashford (Robert Gossett) is alive. Curtis had believed that Marshall was dead ever since he was a child. Curtis does not know what he wants to do about Marshall. Portia wants to help Curtis to decide if he wants to have Marshall in his life. Portia does not want Curtis to have problems because of Marshall. Terry believes that Curtis is the right man for Portia to be with. Terry will want to help Portia to be able to give Curtis the support that he needs.

General Hospital Terry wants Liz and Portia to be able to have the love that they deserve. Terry has wanted Liz to be able to know when she is ready to move on from Franco to find love again. Terry believes that Finn would be a good love match for Liz. Will Terry help Liz to decide to give her heart to Finn?

Terry wants Portia to be able to help Curtis. Can Terry help Portia to figure out what she can do to give Curtis the support that he needs? Liz and Portia will want to help Terry to find someone that she could love. Will Terry find love by helping Liz and Portia with their love lives? Be sure to catch up on everything happening with GH right now. Come back here often for General Hospital spoilers, news, and updates.