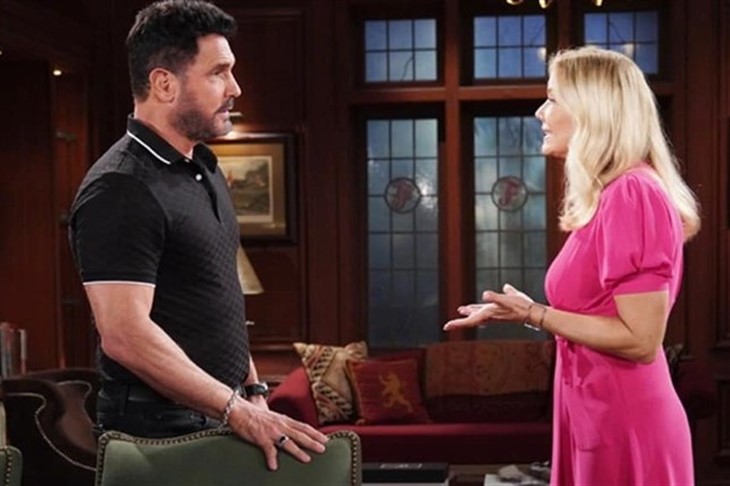 Katie Logan (Heather Tom) is involved in advanced flirting with Carter Walton (Lawrence Saint-Victor). This pairing seems destined to date, with Katie previously voicing her decision about not reviving Batie. That can always change, as this is B&B.

So, Bill’s awareness of Bridge’s troubles through Liam Spencer (Scott Clifton) means that he will be in touch with Brooke. That, along with Justin Barber’s (Aaron Spears) double betrayal being exposed, will give Bill a new incentive to pursue Brooke.

The Bold And The Beautiful Spoilers: Carter Needs A Completely Single Woman

The Bold And The Beautiful Spoilers – What About Deacon Sharpe?

Yeah, what about him? Deacon Sharpe (Sean Kanan) does not have the cache that Bill does.

While Brooke was involved with Deacon back in the daytime day, she did not marry him. True, they have a child, Hope Spencer (Annika Noelle). But the idea of Brooke leaning on Bill is more plausible than her reigniting with Deacon.

Although a triangle between Brooke, Bill, and Deacon, would make Ridge apoplectic and become instant classic soap.

Bill told Justin that he was dead to him. That came after Spears’ character exploited the Vincent Walker (Joe LoCicero) incident on Mulholland Drive.

Justin claims to have snapped due to the intensity of Bill’s pressure. He was broken after serving as Bill’s fixer for all those years on B&B.

The truthfulness of Justin’s claim was shaky, with his turnaround offer to Ridge confirming his mental health was not that shaken. Bill’s awareness that Justin voluntarily switched sides, and is working for Ridge, will ignite the flame.

Katie has been telling Brooke that she is not going back to Bill. Assume that Bridge fractures further, and a separation happens. But Brooke could pour her heart out to Bill even if she and Ridge do not split.

The cabin kiss reaffirmed the intensity of Brill’s attraction. Bill loves Brooke. She would not betray Katie if Tom’s character were not reviving Batie and might also be with Carter.

The elements are falling into place, with chain reactions telegraphed. Ridge and Brooke are at odds. Bill aims for Brooke because he cares for her. And, he wants to target Ridge, who is employing Justin.