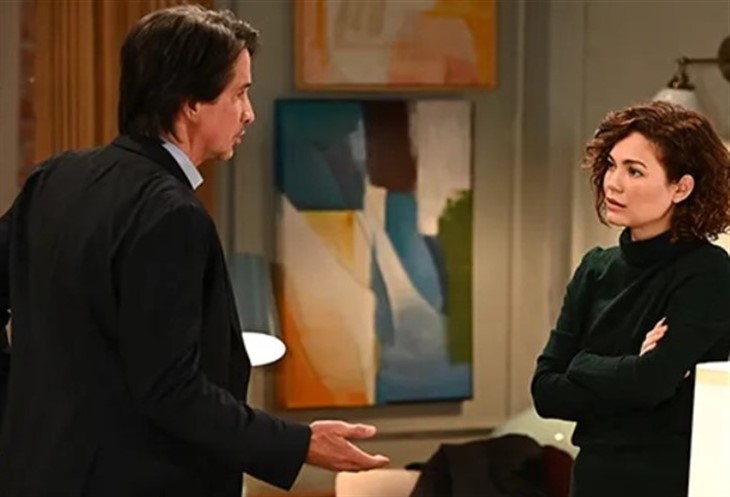 General Hospital (GH) spoilers tease that fans of Elizabeth Baldwin (Rebecca Herbst) have been wondering if she was going to be notified of Jason Morgan’s (Steve Burton) death, and in this week’s General Hospital sneak peek it looks like she was, albeit off screen as Dr. Hamilton Finn (Michael Easton) comforts her over his death!

General Hospital viewers will recall that Finn and Elizabeth spent a fair deal of time worrying about where to hide Peter August’s (Wes Ramsey) dead body, with it turning out he hadn’t even died! General Hospital viewers will recall that confrontation on the roof of General Hospital, as Peter was planning to kidnap Maxie Jones (Kirsten Storms) and their baby when she was born – having arranged beforehand for a fake nurse to deliver the baby. Peter had fake passports and everything, and was waiting for a helicopter pilot to land to whisk him away – who turned out to be the fake nurse Chloe Jennings’ (Kimberly J. Brown) older brother!

General Hospital viewers will recall that the pilot couldn’t land, and Peter grew impatient and angry – as was Finn, who needed more of Peter’s antidote for his younger brother Harrison Chase, (Josh Swickard) who was dying from the unknown toxin that he had ingested accidentally thanks to Peter poisoning coffee meant for Finn! Peter had thrown the antidote, which he claimed was the final bottle of it, and threw it over the side of the roof of General Hospital!

Finn, in turn, threw him down the stairs, where he suffered a heavily bleeding head injury and laid unconscious – Finn and Elizabeth both checked his pulse and he had appeared to be dead! They worried over where to hide the body and finally decided to stuff him in a morgue freezer in the sub-basement of General Hospital, where Helena Cassadine (Constance Towers) had once had a lab. Now, Finn and Elizabeth walk down a corridor talking about Peter’s crimes, with Elizabeth saying she knows how guilty he felt when he thought he had killed Peter!

General Hospital Spoilers – If Peter Had Died, Franco And Jason Would Have Lived

General Hospital viewers then see Elizabeth continue talking to Finn about Peter’s survival, noting that if Peter had died then Jason Morgan (Steve Burton) would still be alive! Finn interjects, agreeing that then Jake Webber (Hudson West) would still have his father, and nods in agreement. He asks Elizabeth how Jake is doing – she kind of shakes her head in the negative. Elizabeth tells Finn that he was already grieving her late husband Franco Baldwin (Roger Howarth) and now he’s grieving his father as well as his late stepfather! Elizabeth says it’s more than any kid should have to process!

Finn agrees, and says he is so sorry about it. Elizabeth says it’s infuriating that Peter was responsible for both the deaths of Franco and Jason. General Hospital viewers will recall that Franco had trapped Peter in his art studio but Peter got the best of him and killed him – and then with Cyrus Renault (Jeff Kober) and Gladys Corbin’s (Bonnie Burroughs) help framed Jason for the crime! Finn reminds Peter is in custody now, and says he’s going to spend the rest of his life rotting in a jail cell – Elizabeth certainly hopes so. Finn wishes there was more that he could do to make Elizabeth feel better, and he takes her hand, then moves in closer for a hug.