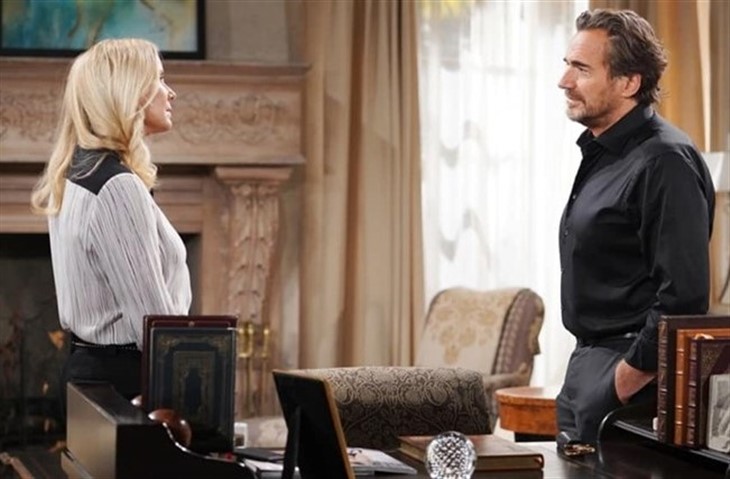 Viewers of The Bold and The Beautiful will recall that Brooke claimed to Hope Spencer (Annika Noelle) that she and Ridge were solid and Hope had nothing to fear regarding the situation with her and her birth father Deacon putting any kind of stress on Brooke and Ridge’s relationship. However, longtime viewers of The Bold and The Beautiful know that Ridge has strong ties to Taylor – they have children together. Brooke and Ridge have never had any children together, although over their many years of history they have broken up and then gotten back together many times!

Viewers of The Bold and The Beautiful will recall Brooke telling Hope not to worry about Ridge’s bluster, because they always work things out. Unless they don’t, but Brooke doesn’t let on that she’s worried! It was pretty extreme for Ridge to try and evict Hope and her family from property he didn’t even have a claim to, and it was very upsetting!

Viewers of The Bold and The Beautiful can tell that Brooke doesn’t want to admit that she still has some feelings for Deacon, even though they wouldn’t be anything near to carrying a torch for him! She has good and positive memories in amongst the bad, but it is the same thing with Ridge – especially considering that they have broken up and gotten back together several times! But, as anyone who has children with an ex-lover or spouse knows, having a family together is usually a whole different ballgame and the children, even if grown, can tend to be the glue that holds them together on some level even if they are separated or divorced!

Ridge has accused Brooke of hiding feelings for Deacon – and the fact is, she does, although not on a huge level. But as viewers of The Bold and The Beautiful know, when a person is accused of something they are trying to hide, they can become very defensive – and Brooke was just a tad on the defensive when Ridge hurled that accusation at her!

Longtime viewers of The Bold and The Beautiful will remember that Brooke and Taylor have always been romantic rivals, especially over Ridge! Even though Taylor will hide her romantic feelings for Ridge when he reaches out to her for emotional support, having a torch for him, Ridge will lean on her about his marital problems with Brooke which he blames on Deacon! Leaning on an opposite sex “friend” about problems in one’s marriage or relationship with another person is never a good idea – people can become close emotionally, romantically and sexually without intending to! Usually such counsel doesn’t work, and even though Taylor is a therapist by trade she probably shouldn’t be the one to counsel Ridge.

B&B Leak: Which Actress Has Been In Touch With Another Soap? https://t.co/d43kA2P5tq #BB #BoldTheBeautiful #Spoilers pic.twitter.com/1whujlSFcc

Viewers of The Bold and The Beautiful will have noted that Ridge is still attracted to Taylor by the way he looked at her when he came over to the cliff house looking to drink with their daughter Steffy Forrester Finnegan (Jacqueline Macinnes Wood) who had gone out at the time. Ridge had come straight from an intense argument with Brooke! Of course, Brooke will find out that Ridge went to Taylor for comfort – or that might be how it’s spun to her, since Steffy and Thomas Forrester (Matthew Atkinson) have been advocating for their parents to reconcile and for their father to dump Brooke for Taylor!