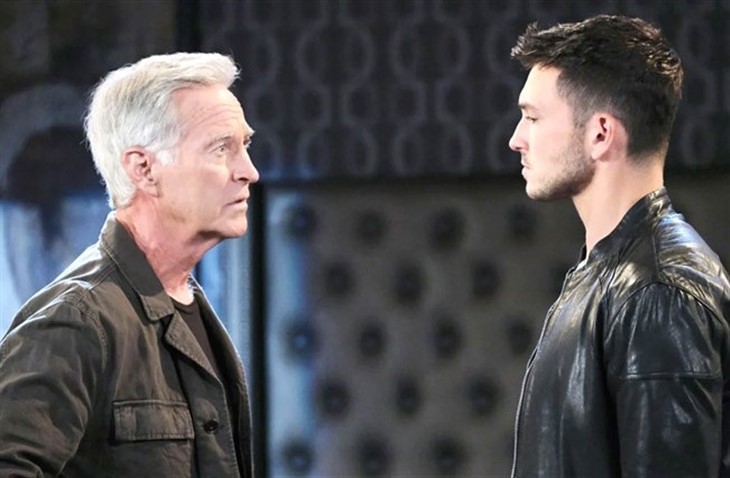 Days of Our Lives (DOOL) spoilers suggest that Ciara Brady (Victoria Konefal) will disappear after she gets too many weird vibes from Marlena Evans (Deidre Hall). Ciara senses that something is off but Ben Weston (Robert Scott Wilson) doesn’t believe that at all. What will happen when John tries to reason with Ben?

Days Of Our Lives Spoilers – Ben Weston Knows All About Abuse

Days of Our Lives Ben knows all about being abused. Ben along with his sister Jordan Ridgeway (ex-Chrishell Stause) and their mother were all abused by Clyde Weston (ex-James Read). Marlena knew that this story would have Ben defending her to the death if need be. All of this is just to get her hands on Ben and Ciara’s baby and turn it into a devil child. Perhaps the devil needs a baby to live on after all this time. Whatever the reason, Ben is allowing Marlena to be close to him and Ciara and that is putting their child in grave danger. As a mother, Ciara’s first instinct is to protect her child even if she has to get away from Ben to do so.

Days Of Our Lives Spoilers: Lucas Faces Daunting Challenges With Sami And Philip

Days of Our Lives’ Marlena will insist that Ben needs to go after Ciara. After all, Marlena doesn’t want to take a chance of Ciara telling John Black (Drake Hogestyn) where she is. The devil knows his time is limited as long as John is in the picture. Ben will open the door to go after Ciara and come face to face with John. John and Marlena will face off before Ben steps between them. Ben has no idea who he is dealing with, but John knows exactly what the possessed Marlena is capable of. Marlena will use her powers to render John speechless and when he lunges at Marlena, Ben knocks him out. Ben then ties John to a chair further helping the devil’s cause.

Days Of Our Lives Spoilers – Shawn Brady Arrives Too

Days of Our Lives Ben and Marlena are about to leave John tied up in the cabin to look for Ciara. Unfortunately for Marlena, Shawn Brady (Brandon Beemer) arrives and informs Ben that Marlena is possessed by the devil. Ben doesn’t believe Shawn at all. Marlena stuns Ben when she reveals herself as the devil to him. However, when Marlena reveals that she wants Ben and Ciara’s child, Ben goes into full-blown protective mode. Is Ben making a mistake going up against the devil in Marlena’s clothing?

Ben loves Marlena but he loves his child too. Ben is determined to save Ciara and his child, will he succeed?