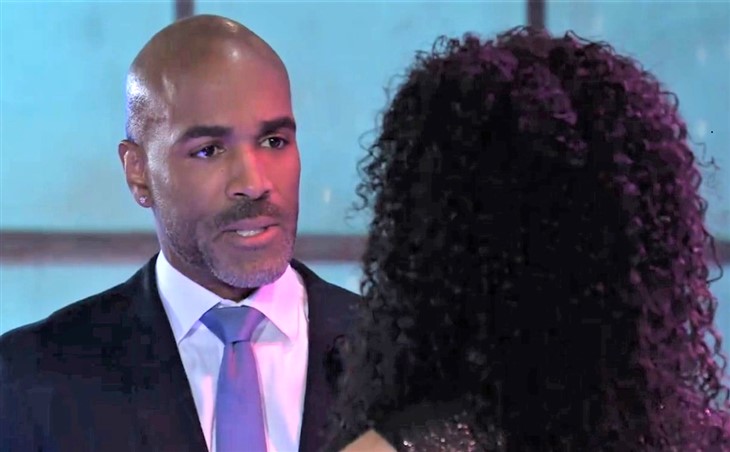 General Hospital viewers will recall that when Stella came back to Port Charles, the first place she went was General Hospital to talk to TJ Ashford (Tajh Bellow)! She wanted to find out what was going on with Curtis, because while she hadn’t yet gone to tell him she was fully recovered from her stroke, she knew from her and Curtis’ communications with each other while she was recovering that something was wrong! General Hospital viewers will recall that Stella tried to get the truth out of TJ, but he told her it wasn’t his story to tell – and told her she’d need to talk to Curtis about what has been bothering him.

That she did – she headed right over to The Savoy and cornered him, and ruled out Jordan Ashford’s (most recently Briana Nicole Henry) health issues taking a dive, but before Curtis could tell her any more details, Marshall walked in! Marshall and Stella eyed each other, with Stella looking rather uncomfortable! After Curtis and Stella started talking, she looked more than a little bit guilty as she admitted “it” didn’t quite happen that way! Needless to say, Curtis was blindsided!

GH Spoilers And Rumors – Stella Henry Knew All Along?

General Hospital viewers can imagine how confused Curtis was when he found out Stella knew all along, and yet that lie was perpetuated about Marshall’s death for all those years! General Hospital viewers know that right before Stella and Marshall came to The Savoy, he had just had his happy reunion with Drew Cain (Cameron Mathison) who he had talked to about Marshall. Curtis talked about Marshall returning from the dead and Drew grinned as he reminded him that’s been known to happen, which gave Curtis a chuckle – he couldn’t deny that! Drew told Curtis he thought he was too close to the situation, and offered to do a deep dive on Marshall and his past himself.

Curtis may still take Drew up on that offer, but Stella’s recognition of Marshall and his of Stella, which was obvious by the way they had looked at each other, told Curtis all he needed to know! Then she admitted that Marshall was his birth father, and that Stella had told Curtis that Marshall would come clean when he was ready to! Marshall remembered Stella too! But Curtis is blindsided by the fact that Auntie Stella, who he had always known as a moral and honest woman, would have lied about something that important and never told him!

General Hospital viewers know that there has got to be more to the story than lies! Even Marshall himself had told Curtis that he had to wait to return until “things were safe” – which sounds a whole lot like someone being put into witness protection, but without his family as unfortunately sometimes happens. A few years back Molly Lansing-Davis’ (Haley Pullos) birth father, Ric Lansing (Rick Hearst) was put into witness protection and she and the others in her family was told he was dead – luckily, as in the case of Marcus Taggert (Réal Andrews) and Trina Robinson, (Sydney Mikayla) it wasn’t that long.

General Hospital viewers know that in that scenario, Portia has the perfect example to give Curtis as to why a parent would “play dead” to their child, and she perfectly understands his anger towards Marshall. Trina was just as angry at her father and Portia wasn’t real happy, either. Curtis remembers. Like Drew, Portia may tell Curtis he’s too close to the situation to be objective and to back away a little bit before he makes a decision about his long presumed dead father. She will also counsel Curtis that perhaps Stella has kept the secret all these years because as little children, he and his brother would not have understood the real situation – and General Hospital viewers will recall Stella even confirmed as much!