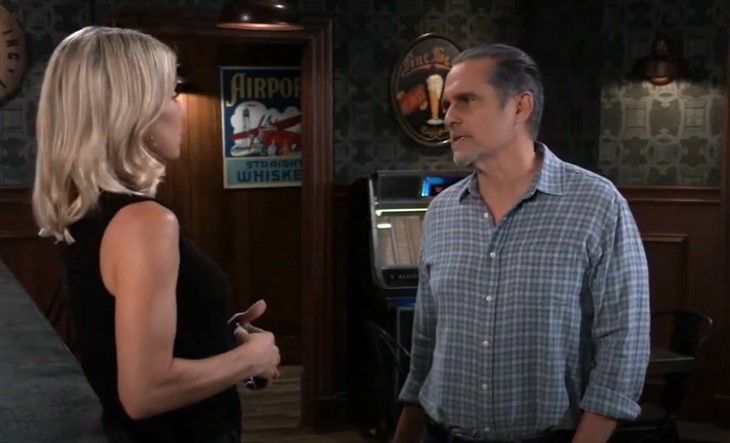 General Hospital’s Sasha has recently learned that her son has irreversible brain damage. Sasha’s baby will be a vegetable for the rest of his life according to the latest doctor reports. Nina thought she was Sasha’s mother at one time. Nina has encouraged Sasha throughout her pregnancy and became close friends with her after they made up.

Nina was looking forward to seeing Sasha’s child and spending time with him. Nina could have been the grandmother that Sasha’s little boy wouldn’t have otherwise had. Nina also knows what it is like to lose a child and wouldn’t want anyone else to go through that. Nina will need comforting and Sonny is likely to be that person. How will that go over with his wife? Who will see them and tell Carly?

General Hospital’s Sonny will be upset over Sasha’s baby as well. Sonny has lost four children himself and knows what it is like to feel so helpless. Sonny would do anything to help Brando Corbin (Johnny Wactor). Sonny is very fond of Sasha as well. Sonny’s heart will be breaking for Brando and Sasha. Carly Corinthos (Laura Wright) may not be close when Sonny finds out the truth about Brando and Sasha’s little boy. Sonny may need comfort just as much as Nina. However, will this lead to the truth about their past relationship coming out?

With General Hospital’s Sonny comforting Nina, Willow Tait (Katelyn MacMullen) could certainly get the wrong idea and blow this secret out of the water. Willow has overheard Sonny and Nina talking about their relationship. Could Willow confront them if she sees this exchange? Will Michael come upon this exchange or even hear Willow call Sonny and Nina out on their actions? How will Michael react to finding out that Willow has known all this time about Nina and Sonny but said nothing? Sonny needs to keep his distance from Nina if he doesn’t want to blow his secret. Will Sonny tell Carly the truth before someone else does?

This secret is about to explode and Carly is not going to be happy. Will Sasha’s baby’s fate have disastrous consequences for Sonny and Carly? Will Carly go after Nina again once the truth comes out? How will this affect Sasha’s relationship with all of them?