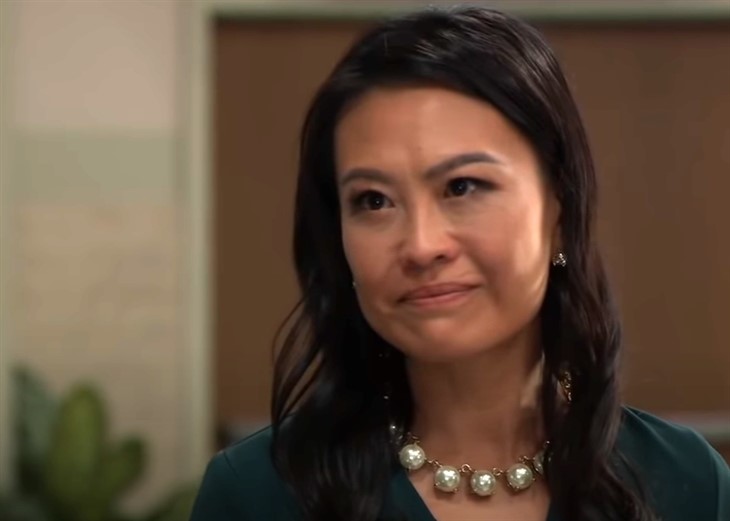 General Hospital Spoilers tease that now that Brad Cooper (Perry Shen) has been paroled from prison, his aunt Selina Wu (Lydia Look) has very specific plans for her nephew. And while it may be a coincidence that Brad was working kitchen duty when Peter August (Wes Ramsey) was poisoned in prison, it could be the start of a new life for mobster Brad. But is Brad really cut out to be in that kind of life?

Selina and Sonny Corinthos (Maurice Bernard) made an agreement that helped Brad secure an early parole from Pentonville. Selina was to have Peter killed, and Sonny would have his guy on the Parole Board vote in Brad’s favor. Sonny wasn’t happy about it, and warned Selina to make sure Brad stays away from his family, especially Wiley Corinthos (Caleb & Kyler Ends). Selina agreed, and soon it appeared as if Peter was poisoned while incarcerated. The question remains if Selina pressured Brad into attempted murder. It seems unlikely, but he was present during the poisoning. Perhaps Selina was testing Brad to see what he is capable of.

General Hospital (GH) Spoilers: Ned And Olivia Get Back Together For Good!

GH Spoilers – Dr. Britt Westbourne Was Told To Stay Away From Brad Cooper!

Brad’s only other connection in Port Charles at the moment is Dr. Britt Westbourne (Kelly Thiebaud). The two became best friends while they schemed together over the years. But they truly care about one another. That’s why Britt was surprised when Selina practically ordered her to stay away from Brad once he was paroled. It seems as though whatever plans Selina has for Brad don’t include Britt. It’s possible that Britt would do her best to talk Brad out of mob life and Selina wants to remove that option!

Selina made it clear that Brad will be living with her now that he is out of jail. Michael Corinthos (Chad Duell) asked Brad exactly why Selina had taken an interest in him all of the sudden. Brad admitted that he wasn’t sure so it doesn’t seem as though Brad has any idea what Selina wants from him. This makes it unlikely that Brad poisoned Peter, although it is still a possibility. And with Peter still alive, Selina still needs to honor her part of her agreement with Sonny. Selina could very well send Brad to finish the job. If Selina wants Brad in the mob, he is going to have to get used to murder as part of his life.

Did Brad poison Peter? Or did Selina find someone else to kill him? Is Selina grooming Brad to join the mob? Anything can happen in Port Charles so stay tuned to General Hospital airing weekdays on ABC. And don’t forget to check back right here regularly for all your General Hospital news, information and spoilers!