Days Of Our Lives (DOOL) Spoilers: Kate Connives To Keep Her Secret 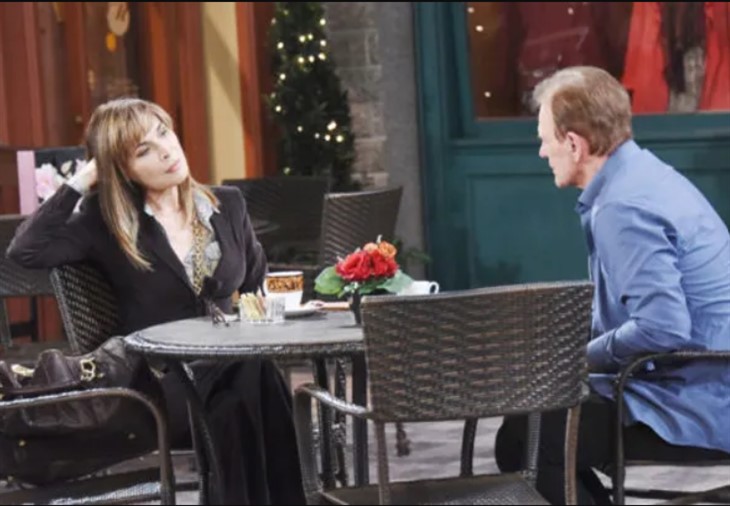 Days of Our Lives (DOOL) spoilers tease that Kate DiMera (Lauren Koslow) will connive to keep her secret from Roman Brady (Josh Taylor) in an upcoming episode of Days of Our Lives!

Days Of Our Lives Spoilers – Kate Looked Like She’d Seen A Ghost, And Maybe She Did!

Days of Our Lives viewers will recall in a recent episode of Days of Our Lives, that Kate looked like she’d seen a ghost, and maybe she did! Kate had just returned to the Brady Pub, where she is now staying in a room there and had mournfully explained to Roman and Rex Brady (Josh Taylor, Kyle Lowder) that she’d had to sign papers to declare her other son Philip Kiriakis (Jay Kenneth Johnson) dead, along with his father, Victor Kiriakis (John Aniston).

Salem District Attorney Melinda Trask (Tina Huang) had pretty much railroaded them into declaring Philip dead so she could have Brady Black (Eric Martsolf) arrested for his murder, citing Brady as a flight risk! But after Rex left, Roman insisted Kate eat something or at least get some rest, and while she was too upset to eat very much she did agree to going upstairs to her room to lay down, even if she wasn’t sure she could sleep. But Kate got the fright of her life to see a very much alive Philip sitting on her bed! A two-legged one at that; when did he get himself a spare prosthetic leg?

Days of Our Lives viewers can imagine Philip not wanting to answer a lot of questions as to why he wanted to frame Brady for his murder, which seems obvious now, but want Kate just to keep his secret – and him, hidden! Philip really doesn’t show a lot of common sense hiding in the home of a former ISA agent and Salem Police Commissioner, but he has to stay somewhere! Days of Our Lives viewers will recall that he’s been fired from Titan again and even though Victor might love his son enough to let him move back into the Kiriakis mansion, he’s likely going to hate him enough for framing his grandson for his murder not to let him!

Maggie Kiriakis (Suzanne Rogers) wouldn’t likely go along with that either! Philip should be made to confess to the police for fraud and the framing of Brady for his murder, but he’s legally dead so it wouldn’t stick until the declaration of death is reversed? If Trask were to find out Philip is alive she might be mad enough to kill him herself after all the hoops she made Victor and Kate jump through so she could have Brady arrested!

Days Of Our Lives Spoilers – Somehow Philip Convinces Kate to Help Him Hide, Meaning She’s Got To Keep Him Secret From Roman!

Days Of Our Lives viewers will see that somehow Philip will be able to convince Kate to help him hide, meaning she’s got to keep him secret from Roman! Roman, too, would turn Philip in for fraud and possibly his setting up Brady to pay for his murder could be a chargeable offense as well! Kate will undoubtedly tell Philip that he’s burned many bridges with this stunt – certainly with Chloe Lane (Nadia Bjorlin) who will now hate him with a passion, and possibly even with Victor!

Days of Our Lives viewers can see how Victor would possibly even disown Philip and break all ties with him for the crazy stunt he’s pulled – not because he loves him any less than Brady, but because what he has done and how he’s gone about it is simply unforgivable!

Victor certainly won’t be a cash cow for his errant son, and Kate is loath to be as well – but Roman would certainly turn Philip in, and she loves him too much to see him live possibly the rest of his life in prison, so she’s got to figure out something to keep Roman from finding out Philip faked his death and is framing Brady for it!