Days Of Our Lives Spoilers: Sami Wins, Nicole Loses In The Battle Over EJ! 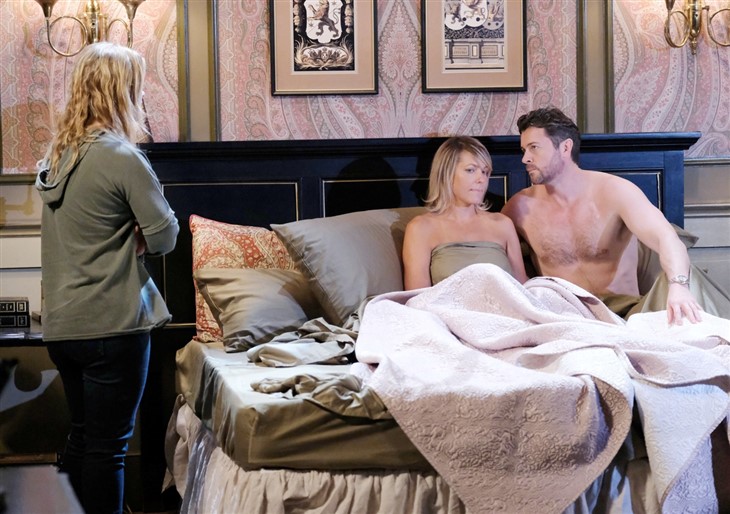 Days of Our Lives (DOOL) spoilers tease that Sami DiMera (Alison Sweeney) wins, Nicole Walker (Arianne Zucker) loses, in the battle of the blondes over EJ DiMera (Dan Feurreriegel) in upcoming episodes of Days of Our Lives!

Days of Our Lives viewers will recall that EJ almost landed in the middle of a catfight when Sami came home after having been kidnapped and held captive for several months! She arrived at her bedroom to find EJ and Nicole in bed getting it on, and she tore into Nicole and even accused her of being her kidnapper! EJ had to do some fancy fast footwork to get out of bed, get his pajamas on and grab and pick up a raging Sami before she killed her competition!

Days of Our Lives viewers then saw Sami return at a later time, hair fixed, makeup on, and carrying a large briefcase style purse. EJ and Sami argued again, but this was right after his mother Susan Banks (Stacy Haiduk) had tried to get “Elvis” as she calls him, to work things out with Sami, and steer him away from Nicole and back to his wife. Days of Our Lives viewers will recall that Sami didn’t sign EJ’s divorce papers because she’d been kidnapped before she could!

Days of Our Lives viewers will recall that Sami brought a set of divorce papers out of her white briefcase style bag after some debate, but took them back after noting that EJ was clutching his wedding ring! EJ made a somewhat flimsy claim, at least in Sami’s opinion, that he had found it in his sock drawer and was getting ready to throw it away but Sami didn’t buy it! Days of Our Lives viewers then saw her tear up the divorce papers in front of his eyes and became determined to prove to EJ that he still loved and wanted her, and grabbed him and started kissing him passionately, after he told her he was in love with Nicole and Sami meant nothing to him.

Sami had called Nicole a dime store version of her, and the two had argued before Sami grabbed him. At that point, EJ had finally gotten Sami off of him and warned her never to throw herself at him again, claiming he felt nothing, and Sami disagreeing that his body said otherwise! At that point Nicole came in, and the two women exchanged dirty looks after Sami told EJ she’d never give up on them because she loved him and she knew that he loved her deep down! However, EJ’s ring was still in plain sight, and Nicole gave it a dirty look too!

Days Of Our Lives Spoilers – EJ DiMera Realizes Sami Brady Is Right, And Sami Brady Finally Gets What She Wants!

Days of Our Lives viewers will see that EJ will realize Sami is right, because there has to be a reason why he held onto the ring. He realizes that his mother had some very good points and advice, and his anger and hurt pride over Sami having cheated on him with Lucas Horton (Bryan Datillo) back months ago were overriding his love for her. EJ will have a change of heart and Sami will finally get what she wants – him!

But, longtime Days of Our Lives viewers have to wonder just how long that recommitment will stand – especially with her daughter Allie Horton (Lindsay Arnold) plotting to get Sami and Lucas back together, which is what Lucas really wants but doesn’t want to push for. Days of Our Lives viewers know that men with abusive tendencies, even if they are just cases of verbal abuse, do so in cycles – it could be just a matter of time before EJ becomes cruel and verbally abusive to Sami again, which is something that Allie so badly wants to spare her from!