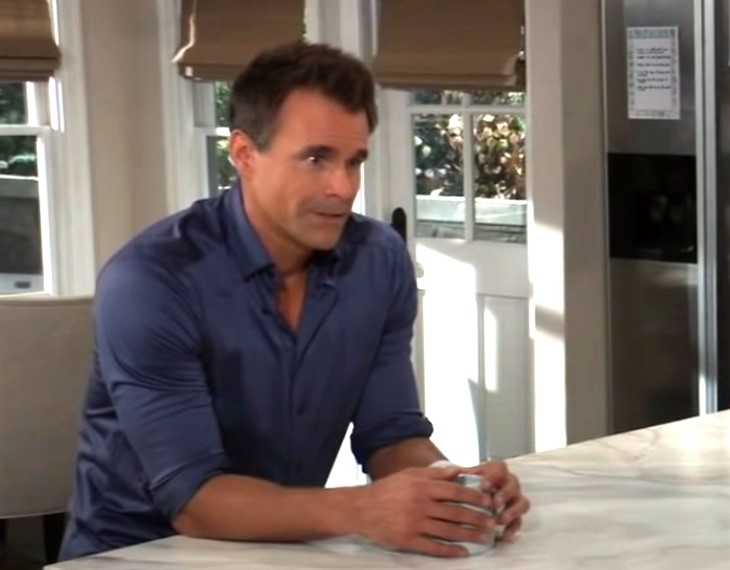 General Hospital (GH) spoilers tease that Drew Cain (Cameron Mathison) and Elizabeth Baldwin (Rebecca Herbst) will run into each other the first time since Drew has returned, and they’ll remember Franco Baldwin (Roger Howarth) and mourn him, and Drew will take concern for “Little” Jake Webber (Hudson West) in an upcoming episode of General Hospital!

General Hospital Spoilers – Drew And Franco Were Foster Brothers, And Drew Cain Was Once Like A Father To Liz Webbers’s Boys

Longtime General Hospital viewers will recall that Drew and Franco were foster brothers, and before Elizabeth and Franco started getting involved, Drew was once like a father to Liz’s boys. That was back when he was suffering from amnesia, and went by “Jake Doe” even though later he was thought to be Jason Morgan (Steve Burton) with plastic surgery. Drew had even started having flashbacks of Jason’s memories, but that was because it was later revealed that memory transfers had been attempted between him and Jason. Jason’s “took” in Drew, but Drew’s didn’t “take” in Jason.

Longtime General Hospital viewers will also recall how Franco used to think that he was Jason’s brother, and that was explained when Jason returned, and it was revealed that Drew and Jason were identical twins before Drew’s plastic surgery, and Franco and Drew were foster brothers when they were very little. Even after Jason returned and Franco and Liz married, Drew stayed close as a loving uncle to “little” Jake, who is by now not so little!

General Hospital viewers have probably wondered, since Elizabeth herself found out about Jason’s death off screen, if Drew even knows about Franco’s having been murdered by Peter August (Wes Ramsey)! Jason always hated Franco for the mind games that he played before his first brain tumor was removed, but it seemed that towards the end, when Franco developed another brain tumor, this time inoperable, Jason’s hatred may have cooled a bit.

Jason tried to beat him up the first time he saw him after returning to Port Charles, but then he found out about the brain tumor and seemed to become more tolerant of Franco. General Hospital viewers will recall that he even recruited Franco to be the driver when he rescued Carly Corinthos (Laura Wright) and broke her out from Ferncliff!

Later, Franco begged Jason to kill him if he became dangerous, which is the same thing that Drew asked Jason to do – Jason refused in both cases! It is quite possible that Jason told Drew about Franco being murdered by Peter, especially since Jason was framed for it! But if he didn’t, then he will find out the shocking news from Elizabeth!

General Hospital Spoilers – Drew And Elizabeth Have An Emotional Reunion, And Drew Takes Concern For His Nephew

General Hospital viewers will see Drew and Elizabeth have an emotional reunion, even more so if she’s the one who tells him about Franco! If so, then Elizabeth will tell Drew that Franco was restored to his own memories, because he was still under the effects of Drew’s memories at the point that Drew stepped onto that elevator at General Hospital, not to be seen again for over two years!

Franco had taken Cameron Webber’s (William Lipton) place after Shiloh Archer (Coby Ryan McLaughlin) kidnapped him, intending to have Dr. Arthur Cabot (Time Winters) download Drew’s memories from the flash drive stolen from Drew’s office into him! Then she’ll explain the rest, and Drew will naturally be grieved, and they will remember and mourn Franco.

Drew will be concerned how her boys are doing, and she’ll tell him – but little Jake seems to be taking things the worst. He is spiraling, having first lost his beloved stepfather and then his birth father! Drew knows that he wasn’t the only one trapped on Cassadine Island, little Jake had been there too – and saw him being tortured into becoming Helena Cassadine’s (Constance Towers) “toy soldier”, being strapped to a tree or pole and being whipped!

That’s why Jake had fearful memories of what he saw, and called him the “Scarecrow”! Jake couldn’t have known back then Drew wasn’t his father either, because they still looked like twins back then! General Hospital viewers won’t be surprised that Drew will be a hands-on uncle to both Jake and Danny Morgan (Zakary Risinger) if they’ll have him!