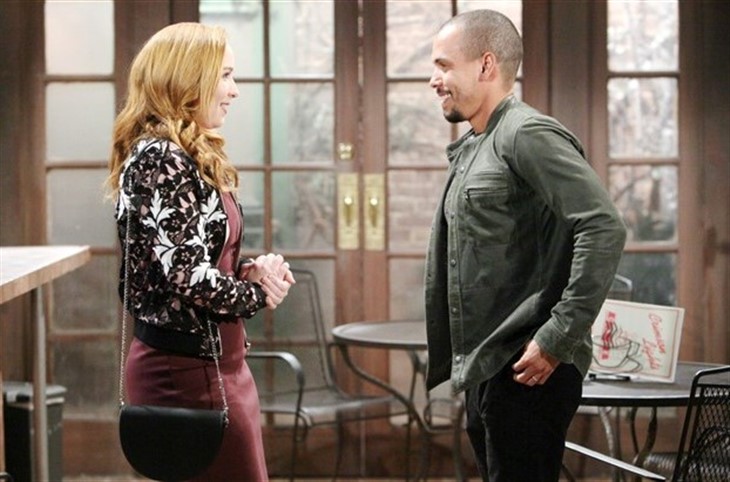 The Young and the Restless (Y&R) spoilers and updates tease Mariah Copeland (Camryn Grimes) has been trying to move on with her life. Mariah had offered to be the surrogate for Abby Newman (Melissa Ordway) in order for her to get to become a mother. Abby turned to Devon Hamilton (Bryton James) to be the donor of for her child.

Mariah was kidnapped while she was carrying Abby’s child Dominic Phillip Newman-Abbott-Chancellor (no actor’s name known for this important role). Abby and Devon were able to save Mariah and Dominic. Mariah has been trying to get over being kidnapped and find a way to let go of Dominic. Devon has been trying to keep his distance now that Abby’s husband Chance Chancellor (Conner Floyd) is has come back home. Devon and Mariah are trying to figure out what they want from their live without being the ones to take care of Dominic.

The Young And The Restless Spoilers: Imani Seeks Out Someone To Love

Mariah has been trying to find a way to keep her distance from Dominic. Mariah has found comfort from her girlfriend Tessa Porter (Cait Fairbanks). Mariah felt protective of Dominic when she was being held captive. Mariah has had trouble letting Abby be the one to be Dominic’s mother. Mariah has worked through her issues with her kidnapping and is picking up the pieces of her life. Mariah came to the realization that she wanted to be a mother.

Mariah believes that she would be a good mother and wants to have her own child. Tessa has been reluctant to become a mother. Tessa has been concerned that Mariah may not be ready to be a mother. Tessa had not been sure if she was ready to be mother but has started to believe she may be ready to find a way for her and Mariah to be mothers to a child. Tessa may believe that she and Mariah could adopt a child.

Devon feels a strong connection to Dominic because he is his biological father. Devon helped Abby when she thought that Chance had died. Chance had been on an undercover assignment which ended with his fellow agents dying in a bombing of their safe house. Abby turned to Devon to take care of Dominic when she left to try to find Chance because she believed that he had survived. Abby was able to find Chance and bring him home.

Y&R Spoilers: Another Chance For Phyllis And Nick?https://t.co/HRxBwCnD50

The Young and the Restless Devon and Mariah are dealing with letting go of Dominic in different ways. Mariah hopes that she and Tessa will be able to have a child of their own. Mariah had thought that Tessa would be the one to have their child but she may decide that adoption would be a better possibility. Will Mariah and Tessa adopt a child?

Devon wants Abby and Chance to have a good future with Dominic. Can Devon find a way to let Dominic go so that Abby and Chance can raise him together? Devon may decide that he might want to have a child with Amanda in the future. Could Devon and Amanda decide that they want to have a child? Be sure to catch up on everything happening with Y&R right now. Come back here often for The Young and the Restless spoilers, news, and updates.