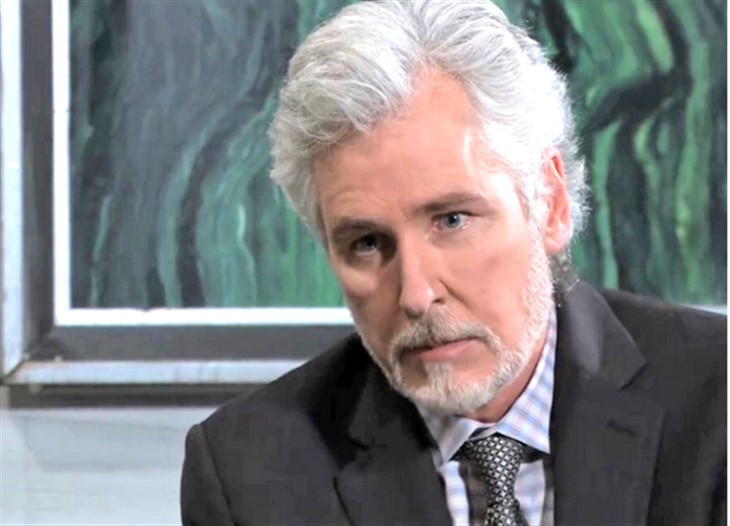 General Hospital Spoilers tease that Martin Grey (Michael E Knight) has been very honest with newfound sister Mayor Laura Collins (Genie Francis) regarding his failed marriages. Martin claims he just isn’t good at relationships. But that sounds very much like Alexis Davis (Nancy Lee Grahn) and her history with men. Alexis seems to pick men who are wrong for her, like Julian Jerome (William DeVry).

General Hospital Spoilers – Perhaps both Martin and Alexis are older and wiser now and realize they could be very good for each other. While Alexis has lost her license to practice law, Martin is very much an active attorney. Both of them have a quick wit and are very eloquent.

Alexis was drunk most of last year after her boyfriend, Dr. Neil Byrne (Joe Flannigan) apparently killed himself by drug overdose in Alexis’ bed! She slept with the very married Ned Quartermaine (Wally Kurth) and almost killed Dante Falconeri (Dominic Zomprogna) accidentally . The attack on Dante landed Alexis in prison, but her nephew Nikolas Cassadine (Marcus Coloma) recently arranged for Alexis to be pardoned.

GH Spoilers – Alexis Davis Isn’t Sure Where She Fits In Now!

Alexis is definitely at a crossroads in her life. She will need to find a new career while avoiding the temptations of alcohol. Meanwhile, Martin has spent the last several months in hiding because his half-brother Cyrus Renault (Jeff Kober) apparently put out a hit on both Martin and Laura. Laura is tired of hiding though and will likely drag Martin back to Port Charles even though the danger has not passed.

Both Alexis and Martin need a distraction from their problems. Perhaps they can work together is some way. Perhaps Alexis can work behind the scenes on one of Martin’s cases. Just because she can’t practice law doesn’t mean she can’t help behind the scenes. Perhaps the two will find a newfound respect and admiration for one another that could lead to them finally finding love!

Gh Spoilers – What Do You think?

Could Alexis and Martin make a good couple? Or are they both too broken to even try? Do you think that would make a good team professionally?Anything can happen in Port Charles so stay tuned to General Hospital airing weekdays on ABC. And don’t forget to check back right here regularly for all your General Hospital news, information and spoilers!