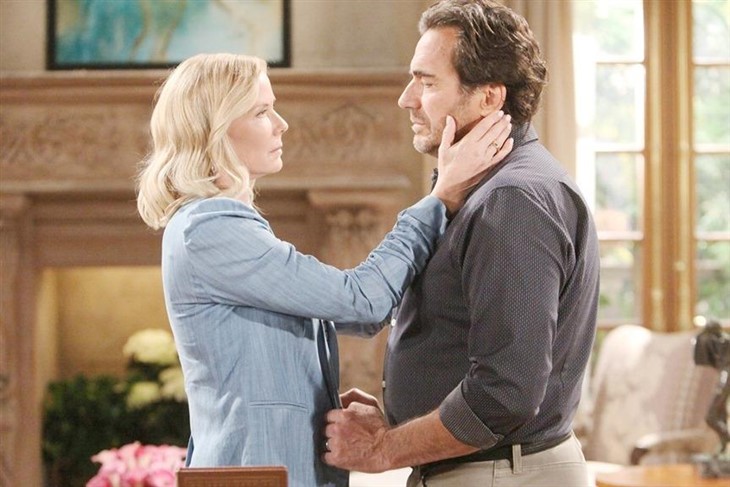 The Bold and the Beautiful (B&B) spoilers document that Brooke Logan Forrester (Katherine Kelly Lang) was visibly bothered by Ridge Forester’s (Thorsten Kaye) tell about his other great love. Yes, Taylor Hayes (Krista Allen) is back, and she is likely here to stay.

So, Brooke does not believe that Taylor should be allowed to live in Los Angeles, California, and Ridge wants Deacon back in jail. Two dictators, rather than a pair of spouses, combine to represent a couple called Bridge.

The Bold And The Beautiful Spoilers: Brooke Has Her Hands Full With Taylor And Quinn

Brooke is fine with Taylor being elsewhere in the world. She is happy to praise Allen’s character for the volunteer work she has been doing in Africa.

The above begs a question. What meaningful volunteer work has Brooke done recently?

It is reasonable for Brooke to be bothered by Taylor’s surprise return, based on the history of conflict between two of B&B’s legendary legacy characters. But Brooke’s outlook contrasts with what she wants Ridge to accept regarding Deacon.

Telling Hope that she had to move out of the cabin if she wanted to continue to see her father was bad. The decision Ridge made, when bee-lining to one of the many picturesque settings on this show, was impulsive.

However, Ridge has had time to reconsider what he was doing. It is not his place to tell Brooke and Deacon’s daughter, who is a grown woman in her thirties, what she is allowed to do.

The same would be true if she were his biological daughter instead of his stepdaughter. But at least in that hypothetical instance he would be acting with bloodline instincts in mind.

The Bold And The Beautiful Spoilers – Bridge To Nowhere Forms

Ridge’s position will not shift. Deacon is allowed to be on the property. So, there will be repeated instances of interaction and confrontation.

The Bold and the Beautiful Spoilers: Steffy Struggles to Control Rage, Sheila and Finn’s Holiday Hughttps://t.co/qVgxNEXSnS

Brooke’s revived feelings about Taylor will develop when Allen’s character begins to push pro-Forrester topics. One will be that Thomas Forrester (Matthew Atkinson) should assert control over his son, Douglas Forrester (Henry Samiri).

Bridge is weakening by the day. Pressure is building through two seemingly unsolvable issues that involve varying levels of former flames. Yes, good soap is bubbling in this version of LA.