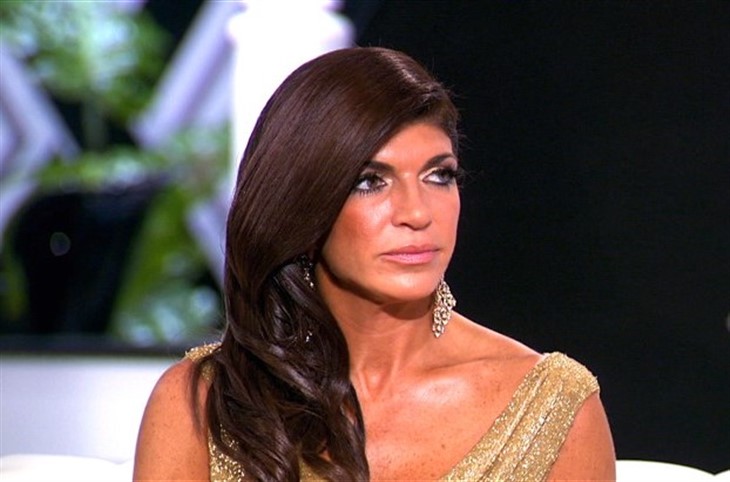 Real Housewives Of New Jersey (RHONJ) star Teresa Giudice lost it in the trailer for Season 12 of the Bravo show. It premieres on Tuesday, February 1 at 8/7c on Bravo. Well, it looks like massive drama comes, as one segment of the teaser for it revealed Teresa being violent. In fact, she threw her glass hard at Margaret Josephs, sending glass flying everywhere. Naturally, fans reacted to the scene.

Luis Ruelas came into the life of the Bravo star after Joe and Teresa divorced. Recall, they both ended up behind bars on charges of federal fraud. Then, Joe ended up deported to Italy, and the marriage ended. Well, it didn’t take long for her to move on and she dates Luis, a rather good-looking man. Well, her 15 months in prison probably wasn’t a doddle in the park, but it certainly didn’t curb the reality TV star’s temper.

Real Housewives Of New Jersey star Teresa Giudice often sits at the center of drama in the Bravo show. Meanwhile, Margaret Josephs becomes more and more outspoken. Certainly, it was bound to happen, that one day an explosive scene would come between them. Actually,  looks like Margaret chose a bad time to give Teresa some straight talk. It took place in a  restaurant full of patrons.

Monsters and Critics reminded Bravo fans about the time that Joe’s ex once “flipped a table.” However, while defending her relationship with Luis, she freaked out worse than that. She felt that Margaret spread rumors about them. So, when Margaret sassed her back, she threw a glass and some dishes at her. It all went down at a dinner in Nashville.

Real Housewives Of New Jersey star Margaret Josephs yelled at Teresa Giudice and called her a “sick, disgusting liar.” Well, for her efforts, she got a lot of glass on her. Plus, the scene promised way more drama. Furious, Teresa stood up and launched herself into aggressive mode. When @bravohousewives shared the clip on Instagram, fans commented about it.

Bravo Fans React To The Violent Scene With Margaret Josephs

Real Housewives Of New Jersey fans didn’t all condemn, Teresa Giudice. One of them wrote, “Team Teresa!! Marge is such a sad hater 😝.” Then another one noted, “Marge needs to mind her own d–n business.” But others slammed the love of Luis’ life.

One disgusted follower wrote, “Now that she’s not fresh out of prison she forgets how easily she can go back.” Another  one alluded to that saying, “Looks like someone needs more jail time 🤦🏽‍♀️.” This comment also arrived: “team marge for life. teresa always gets a pass for that s–t.”

Be sure to catch up on everything happening with RHONJ right now. Come back here often for more Real Housewives Of New Jersey Season 12 spoilers, news, and updates.