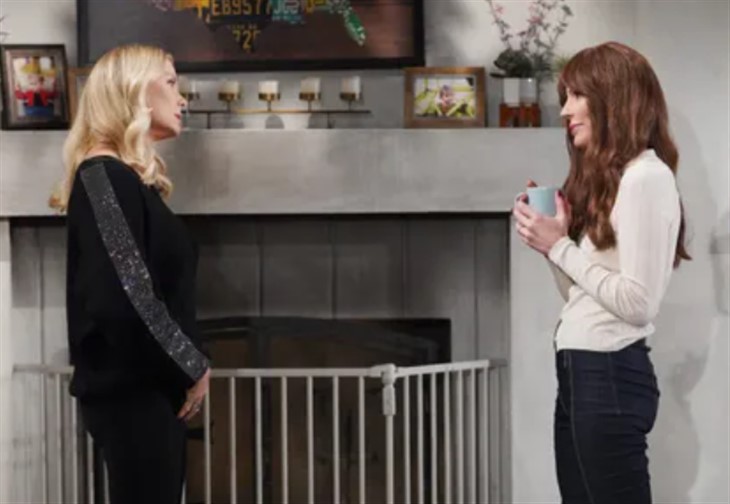 The Bold and the Beautiful (B&B) spoilers document that Taylor Hayes (Krista Allen) has returned to Los Angeles, California, with a distinctively different look and attitude. She is determined to build a new life rather than rehash or relive the past.

Teasers indicate that Taylor will not oppose Sheila’s inclusion at an upcoming family Christmas event. No matter the inner thoughts of the recast character Allen is playing, the potential for game-changing soap is afoot.

Sheila married Eric Forrester (John McCook) years ago. She did not take Ridge away from Taylor. That is one way to rationalize a merging of interests.

Taylor has already achieved something significant. Brooke did not accomplish her goal when intentionally going to the cliff house, where she assumed Taylor would be alone.

Brooke heard the truth rather than glean Taylor’s intentions toward Ridge and send a stay-away message. Taylor is back, there are no agreements, and she can deal with it.

What would Sheila have to lose by exploring some form of alliance with Taylor? In a word, nothing.

Sheila knows that she needs a chance to prove herself to John Finn Finnegan (Tanner Novlan). That makes Steffy’s resistance intolerable and likely, impossible to overcome.

However, if Taylor can convince Steffy to accept a controlled access agreement, then Sheila would have her opening. An exchange of ideas, spoken and unspoken, can be shared about Brooke, turning the tables completely over on the Forrester family’s self-appointed matriarch.

The Bold And The Beautiful Spoilers – Taylor Hayes Must Be Creative

Taylor knows what past efforts led to. She lost Ridge twice and currently has to stomach Brooke’s Bridge snark.

But Ridge ran to Taylor and opened up about Brooke’s behavior without needing to be prodded. That was huge, as it demonstrated that he still values Taylor’s perspective.

Of course, Taylor needs to gauge whether Ridge might be using her shoulder without a real chance for a Tridge reunion existing. But if Brooke continues to give Deacon the green light, then an arrangement where Sheila has supervised access to Finn will help to push Lang’s character to act out even more.

The intent would be to increase pressure on Brooke to such a great degree that she becomes so intolerable that Ridge can take it anymore. The plan is not without risks and holes. But this is B&B, so why not pursue it?