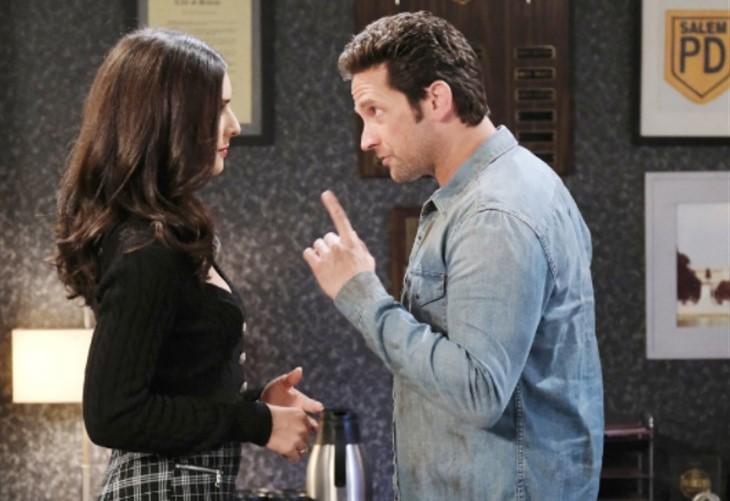 Days of Our Lives (DOOL) spoilers tease that Jake DiMera (Brandon Barash) and Gabi Hernandez (Camila Banus) will meet with Li Shin (Remington Hoffman) in an upcoming episode of Days of Our Lives, as their plot to take over both Titan and DiMera takes on speed!

Days of Our Lives viewers will remember a couple of weeks ago that Jake and Gabi offered their services to Victor Kiriakis (John Aniston) since with Philip Kiriakis (Jay Kenneth Johnson) missing and presumed dead, and Brady Black (Eric Martsolf) accused of killing him, Victor didn’t have anyone to run Titan! At the time, Victor told them he’d think about it – since he was seemingly in a bind.

Days of Our Lives viewers know that since Philip is alive and Brady’s charges are dropped because of no body being found, that could change, but Jake and Gabi don’t know anything about that yet. Taking over Titan is only part of their plan, however – they want to take over DiMera Enterprises as well, and it sounds like they may want to merge the two companies since Li Shin would have nothing to do with Titan! Days of Our Lives viewers will recall that Shin is an important part of the DiMera board of directors, however, and any organizational changes or changes in leadership would have to be approved by him and the board members.

DOOL Spoilers – Jake Lambert Is Conniving To Take Over DiMera

Days of Our Lives viewers will recall that Jake has been conniving to take over DiMera Enterprises, but when EJ DiMera (Dan Feurreriegel) came to town, he threw Jake and Gabi out on their ear! Chad DiMera (Billy Flynn) is supposed to be an equal partner with his brother in running the company, but EJ has pretty much taken over the whole company. Chad really hasn’t been involved in much of the company’s affairs other than as a figurehead as of late, with EJ lording it over him and making all the big decisions!

He determined right away that DiMera would return to what it was when Stefano DiMera (Joseph Mascolo) himself was in charge and even though Chad and his family and Tony and Anna DiMera (Thaao Penghlis, Leann Hunley) are still in the DiMera mansion, EJ is calling all the shots with the company! Jake and Gabi were forced to move into her brother Rafe Hernandez’ (Galen Gering) house, which has been making for a two’s company, four’s a crowd situation with Rafe, Gabi, Jake, and Ava Vitali (Tamara Braun) all living there at the same time! The plans are for Jake to run DiMera and Gabi to run Titan, and once they’re in place at the two respective companies, they want to merge them.

Days Of Our Lives Spoilers: Sami’s Anguish, Turns To Lucas After EJ’s Arresthttps://t.co/rszXyhaF1g

Days of Our Lives viewers will see Jake and Gabi meet with Shin before a board meeting or vote is called, because they will want to present their business plan in order to move forward. The first thing will be getting EJ removed and Jake installed as CEO of DiMera Enterprises, and Chad will likely be removed as well. They also talk about Gabi running Titan, and the issues of needing a CEO that Victor has, and then talk about their long range merger plans. Days of Our Lives viewers know that getting rid of EJ will be harder than they think, and Titan may no longer need Gabi to run it with Brady exonerated!