General Hospital Spoilers: Victor Checks On A Patient At GH – Will Peter End Up Missing? 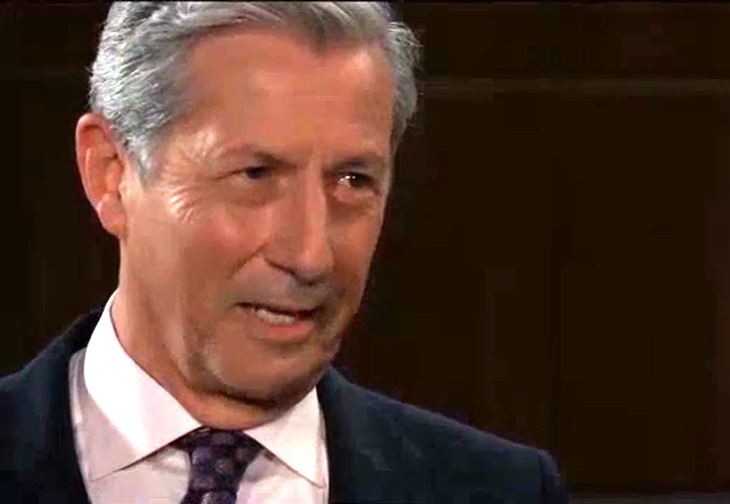 General Hospital (GH) spoilers tease that Victor Cassadine (Charles Shaughnessy) will check up on a patient at General Hospital in an upcoming episode. Will Peter August (Wes Ramsey) come up missing?

General Hospital viewers will recall that Peter has been comatose since ingesting an unknown poison after Brad Cooper (Parry Shen) brought him a breakfast tray in Pentonville Prison. This was after Sonny Corinthos (Maurice Benard) talked to Selina Wu (Lydia Look) about putting a hit on Peter to avenge Jason Morgan’s (Steve Burton) presumed death, as well as protecting Maxie Jones (Kirsten Storms) and others after Maxie asked Sonny to “end” Peter!

Peter was found unresponsive in his cell, and after he was not able to be revived in the Pentonville infirmary, 911 was called and he was brought to General Hospital. There, Dr. Hamilton Finn (Michael Easton) and Nurse Elizabeth Baldwin (Rebecca Herbst) were assigned his case, but as General Hospital viewers will recall, although Elizabeth didn’t cut off his life support like she was tempted to do, Finn didn’t try real hard to get him out of his coma. Toxicology tests are still pending and have not come back that could identify the poison and an antidote.

General Hospital viewers know that the general consensus is that Peter is better off dead or at least permanently disabled! Not a citizen of Port Charles would disagree with the idea of Peter being in a permanent coma, except for possibly one – it hasn’t been revealed for sure who got him out of that morgue freezer in General Hospital’s subbasement or who brought him back to life, but there is a good chance it was Victor Cassadine (Charles Shaughnessy)!

Longtime General Hospital viewers will recall that Helena Cassadine (Constance Towers) old lab was where Finn and Elizabeth hid Peter’s body – being sure he was indeed dead – in a morgue freezer. Victor would have known about that old lab and he may have access to some of the formulas to bring someone out of stasis or back to life as well.

Victor was not only the head of the WSB when Robin Scorpio-Drake (Kimberly McCullough) was kidnapped to bring Stavros Cassadine (Robert Kelker-Kelly) back to life, he was also the head of the Crichton-Clark Clinic where Robin found Drew Cain (Cameron Mathison) assuming he was Jason Morgan (Steve Burton) and used the serum she was forced to develop for Stavros on Drew instead! It makes sense that Victor may have managed to get a copy of that protocol!

Even though Victor claimed to Valentin Cassadine (James Patrick Stuart) that Peter had turned against him, the plain facts are they had been working together! The big question will be if Peter disappears and he’s the patient Victor checks on – which is very likely – whether Victor brings Peter out of his coma and hides him or kills him and hides him! Victor has been acting the good guy to his Cassadine relatives for the most part, but as Laura Collins (Genie Francis) said in effect to Kevin Collins (Jon Lindstrom) in a recent episode of General Hospital, when Cassadines are being good is when you have to worry about them!

If Victor was truthful to Valentin about Peter, then more than likely he’ll finish him off and he’ll just disappear and never be heard from again. That would be disastrous to Maxie Jones (Kirsten Storms) who then would never get her baby back! Louise Jones (London and Jett Prinzo-Berendt) would have to be hidden in plain sight indefinitely as Bailey Quartermaine! Plus, there are many in Port Charles who have been harmed by the actions of Peter August who obviously need the closure that would come with knowing absolutely for sure that he is dead and would never be a threat again!