Days Of Our Lives Spoilers: Johnny’s Marriage Crumbles, Chanel Turns To Allie For Love And Support 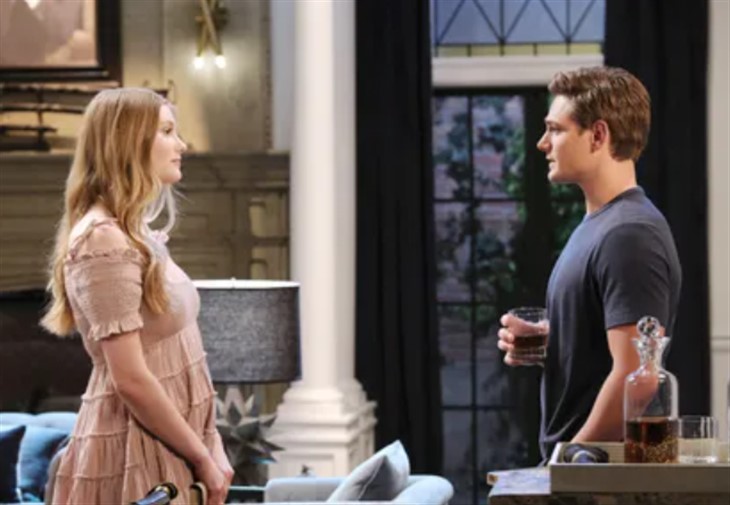 Days of Our Lives (DOOL) spoilers reveal that Johnny DiMera (Carson Boatman) and Chanel Dupree (Raven Bowens) are happily married. They go into 2022 full of hope but it’s just not meant to be. The marriage crashes down shortly after the new year and the couple goes in two separate directions. Chanel turns to Allie Horton (Lindsay Arnold) but what does this mean?

DOOL spoilers reveal that Johnny and Chanel excitedly announced their marriage to their parents. EJ DiMera (Dan Feuerriegel) suggested an annulment and Sami DiMera (Alison Sweeney) wouldn’t give her blessing. Paulina Price (Jackée Harry) objected at first, then decided to trust her daughter.

Then, the couple shared the news with Allie and Tripp Johnson (Lucas Adams). Allie doesn’t have a good reaction, but soon changes her stance and supports her best friend.

In the new issue of Soap Opera Digest, head writer Ron Carlivati gave a preview of what to expect in 2022. The scribe mentioned that Johnny and Chanel go into the new year full of hope and promise. However, something happens and it sounds like it tears the couple apart.

“This [the marriage] was an impulsive decision that they are happy with; they love each other. They go into this new year full of hope and just shortly afterward, everything comes crashing down and it sends the couple in two totally different directions.”

Days of Our Lives spoilers reveal that the head writer added that Chanel turns to Allie. What we don’t know is what exactly happens to the marriage and what direction Johnny goes into. As for Chanel, will she be turning to Allie just as someone needing her friend’s support? Or could Chanel turn to Allie as someone she loves in a romantic sense?

Days of Our Lives Spoilers – Turning to Allie Horton

It has been speculated for a long time that Allie is in denial of her real feelings for Chanel. After kissing Chanel, Allie did a sudden 180 and took Tripp to bed. Then, when Tripp said the “L” word, Allie was unable to say it back. A lot of excuses and explanations were given for this, but some fans are convinced that there is only one real reason for it. That Allie might know deep inside that her heart beats for Chanel, not Tripp.

So, with Johnny suddenly single, who will he be paired up with next? What does the future hold for Tripp when he gets his heart broken? We will have to keep watching the NBC soap to see what happens next.