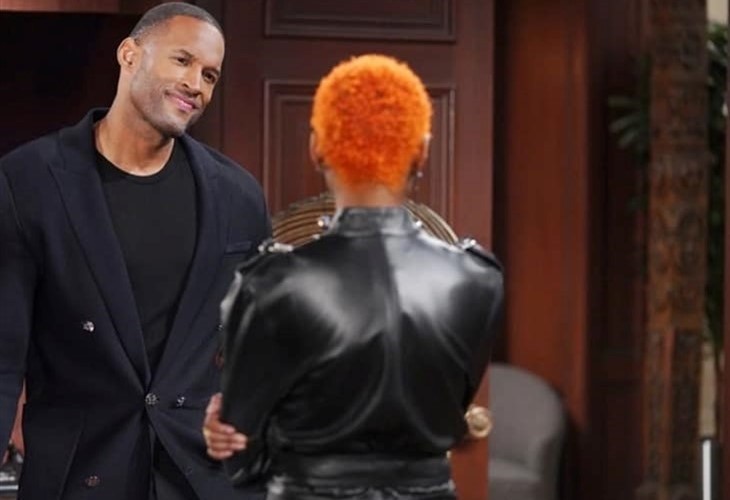 The Bold and the Beautiful spoilers reveal that Carter Walton (Lawrence Saint-Victor) warns Paris Buckingham (Diamond White) about the upcoming proposal. Even though Paris cares about Zende Forrester (Delon de Metz), she isn’t ready for anything serious. How will Paris deal with Zende’s proposal plan and can she turn him down without breaking his heart?

The Bold And The Beautiful Spoilers – Zende Forrester’s Romantic Proposal

B&B spoilers reveal that Zende picks up the ring that he had Quinn Forrester (Rena Sofer) design a few weeks ago. It’s finally ready and Zende will likely think it’s perfect. Zende has a romantic marriage proposal planned and in his mind, there is no reason to think that Paris will say no.

In fact, he thinks everything is going great. Zende assumes that he and Paris are on the same page as far as their relationship is concerned. Unfortunately, he is completely wrong about that.

According to the new issue of Soap Opera Digest, Carter learns that Zende plans on proposing to Paris. Knowing that Paris isn’t going to want this, he warns her about what Zende is planning. It’s not that Carter doesn’t want Zende and Paris together. Interestingly enough, Carter just understands Paris better than Zende does.

The Bold And The Beautiful Spoilers – Paris Buckingham Not Ready

The Bold and the Beautiful spoilers reveal that when Paris and Zende talked a few months ago about the status of their relationship. At that time, Paris said that she cared about Zende but wasn’t ready for anything serious. Even though Zende understood, he assumed that they have grown closer and more serious since then. For Paris, though, her feelings have not changed. Paris isn’t ready for a big step like marriage and still doesn’t want anything serious.

Knowing this, Carter lets Paris know what Zende is planning. Carter worries that Zende will get his heart broken or Paris will agree to marry him when she really doesn’t want to.

The best thing for Paris to do in this situation is to talk to Zende before he plans on proposing. Of course, he might consider Carter telling Paris his plans a betrayal. However, in Carter’s mind, he’s protecting both of his friends from a painful experience. The last thing Carter wants is for Zende and Paris to have a repeat of what he went through with Zoe Buckingham (Kiara Barnes).

The question is how will Zende deal with Paris’ rejection? Will he understand that Paris isn’t rejecting him, it’s just the idea of marriage she’s rejecting? Or could this end their relationship?