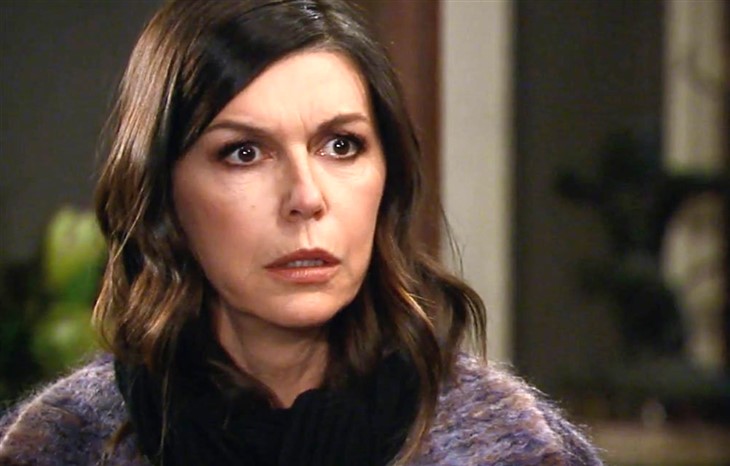 General Hospital spoilers tease that Anna Devane (Finola Hughes) and Felicia Scorpio (Kristina Wagner) will team up to protect Maxie Jones (Kirsten Storms) from a miraculously “cured” Peter August (Wes Ramsey) who once again is on the loose in an upcoming episode of General Hospital!

General Hospital viewers will see Peter disappear mysteriously – or miraculously, depending on one’s point of view – from his room in the intensive care unit of General Hospital! Viewers will recall that he was found unresponsive in his cell at Pentonville Prison after he ingested an unknown toxin in his breakfast meal. Sonny Corinthos (Maurice Benard) had talked to Selina Wu (Lydia Look) about a hit on Peter, and she demanded her nephew Brad Cooper (Parry Shen) make parole at his parole hearing.

General Hospital Spoilers: Victor Checks On A Patient At GH – Will Peter End Up Missing?

This sounds like perhaps the devastating news is that Peter once again has disappeared and is on the loose and looking for Maxie – and their daughter! He may be looking for Drew as well, because his original plan was to activate Drew’s brainwashing and have him do the dirty work for him, but then things went south on Cassadine Island!

General Hospital viewers know that as for Maxie and Peter’s daughter, Louise Jones (London and Jett Prinzo-Berendt) she remains hidden in plain sight as Bailey Quartermaine, the daughter of Brook Lynn Quartermaine (Amanda Setton) and Harrison Chase (Josh Swickard). Maxie, Brook Lynn and Chase all believe that Louise is safe as Bailey, Chase having figured out the ruse and stepping up as her “real” birth father, with Valentin Cassadine (James Patrick Stuart) getting his heart broken, although Brook Lynn generously allowed him a Christmas visit when he and his daughter Charlotte Cassadine (Amelie McClain) brought the baby a Christmas gift.

But with Peter on the loose, and in Port Charles, one can’t be too careful – or should that be the entire population of Port Charles?! After all, Peter could be lurking behind any corner or hiding in plain sight himself – although he’d be pretty hard to miss even if he managed to scrounge up another of his late father’s inventions – a lifelike rubber mask!

The only person who could possibly be anywhere close to Peter’s height and body type would be Drew! Longtime General Hospital viewers will recall that Cesar Faison (Anders Hove) disguised himself as Duke Lavery (Ian Buchanan) to fool Anna, while Liesl Obrecht (Kathleen Gati) disguised herself as Anna to fool him!

General Hospital viewers know that it’s time for Anna and Felicia to take action, in addition to Drew, Valentin, and many others who are trying to protect Maxie! Probably the best plan of action might be to put Maxie in a WSB safe house with guards, although with Peter’s ability to brainwash just about anyone, even that may not be foolproof!

General Hospital viewers will recall Peter tracked Maxie to both Texas and to Nixon Falls, but didn’t kidnap her then because she didn’t have Louise! Perhaps the best plan might be for Maxie to simply move home with her mother, and stepfather Mac Scorpio (John J. York) and ride the storm out as Hurricane Peter blows over!