The Bold And The Beautiful Spoilers: Brooke Being A Busy Body Again – Sheila Sees Another Roadblock 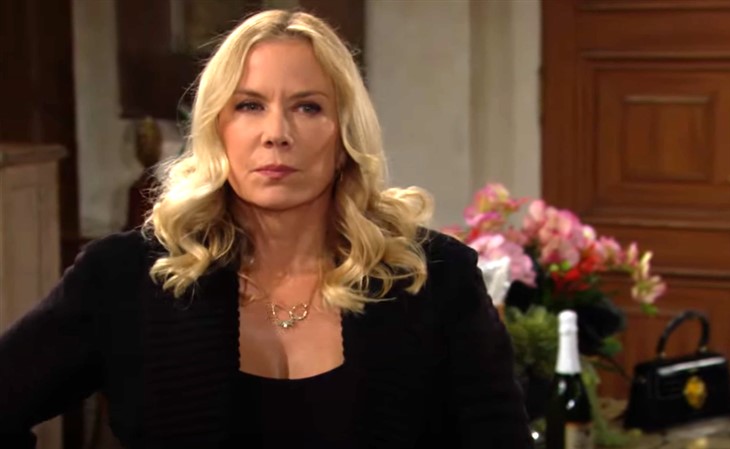 The Bold and the Beautiful (B&B) spoilers document that Brooke Logan Forrester (Katherine Kelly Lang) will once again insert her self-importance into other people’s lives. Sheila Carter (Kimberlin Brown) is teased to be verbally lambasted by Brooke, who does not want her to be anywhere near Sinn’s son.

Kelly Spencer (Avalon and Colette Gray) lives at the cliff house as well. She is Steffy and Liam Spencer’s (Scott Clifton) daughter. Neither Kelly nor Liam are genetically related to Brooke.

Any reference to Sheila must include a mention of her notorious backstory. But that is beside the point because Brooke has no logical say in cliff house matters.

The Bold And The Beautiful Spoilers – Taylor Hayes Should Not Be In Los Angeles, California

The section header was Brooke’s recent implication to her husband, Ridge Forrester (Thorsten Kaye). Taylor Hayes (Krista Allen) is not genetically connected to Brooke. That does not matter to Lang’s character, who sees Taylor as a problem to be contained.

Brooke was fine when Taylor was only available via video chat from Africa. Taylor’s missionary work represented the ideal scenario, as her longtime rival was living in another part of the planet and played no in-person role on B&B.

Occasional references to Taylor could be made, with Brooke’s put-downs producing no repercussions. She spoke behind Taylor’s back with no visible remorse.

Brooke continues to provoke her husband’s sensibilities by insisting that Ridge should not be reacting as he is to Deacon Sharpe’s (Sean Kanan) presence. Hope Spencer’s (Annika Noelle) feelings about having a relationship with her father override Ridge‘s instincts.

So, Brooke believes that her decisions must be enforced. Other people, be they Ridge, Sheila, or whoever, do not possess the same magical ability to see the world as clearly as Brooke does.

Apparently, Steffy is not allowed to take her mother’s advice about Sheila. Finn is not allowed to be influenced by Taylor either. No, Steffy, Finn, and Taylor should all follow Brooke’s orders about their lives.

The Bold And The Beautiful Spoilers – Sheila Carter Has Unexpected Allies

Sheila initially believed that her sole ally was Deacon. But he rejected her Shecon plan. Fortunately for Sheila, Deacon said no and has offered an example of how to honestly bond with his child.

Never in a million soapy years did Sheila anticipate that Taylor would encourage Steffy to welcome her on Christmas Eve. But it happened.

Steffy will naturally defend Allen’s character when Brooke blasts Taylor about Sheila. That will also serve to set up Steffy as Sheila’s defacto defender.