The Bold And The Beautiful Spoilers: Sheila Sabotages Herself – Brooke Bash A Short-Term Splash 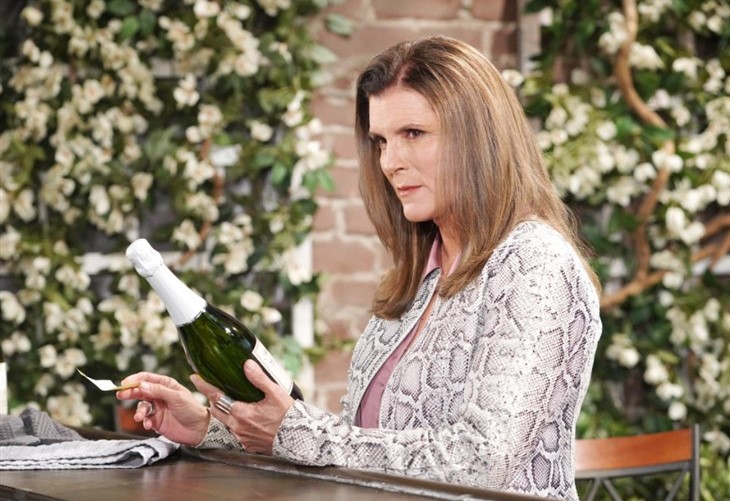 The Bold and the Beautiful (B&B) spoilers document that Sheila Carter (Kimberlin Brown) bowing to her worse impulses. Because she has alienated so many people through the years, Sheila has no human buffer to serve as a counter. That reality is generating the planned Brooke Logan Forrester (Katherine Kelly Lang) bash.

The word bash at this time of the year would generally reference Christmas and New Year’s celebrations. But in this instance, Sheila is exploiting information she gained at Il Giardino to set Brooke up for a major fall off the wagon.

The Bold And The Beautiful Spoilers – Were Those Bottles Stolen?

How did Sheila manage to get four bottles out of Il Giardino? Paying for them, even if that was done with paper bills, would still mean that an employee witnessed Sheila make the purchase. Would she take that chance, or did Brown’s infamous character steal from the popular restaurant that is within walking distance of Forrester Creations?

The Bold And The Beautiful Spoilers: Brooke Being A Busy Body Again – Sheila Sees Another Roadblock

Sheila carried a plastic container that held two large paper bags, from which she removed two distinctly different sets of glass bottles, into her hotel room. The audience then saw the elaborate process in which Sheila switched the labels on the alcoholic champagne to the non-alcoholic.

Fans are likely also wondering where Sheila’s source of income originates. She is not believed to be working. So, how is she funding her room, transportation, food, and developing escapades?

Brooke went way overboard in telling Sheila that she needed to stay away from her family. So, Brooke considers Ridge Forrester’s (Thorsten Kaye) daughter, son-in-law, and grandson her responsibility, with Sheila having none?

Sheila verbally provoked Brooke by citing Stephanie Forrester’s (Susan Flannery) famous put-downs about Lang’s character. But since Brooke believes that Sheila is still unstable, she should have known not to respond in kind.

Brooke strongly demeaned Sheila in front of Deacon Sharpe (Sean Kanan) and threatened the Christmas Eve breakthrough. So, Sheila feels threatened and is reacting to her villainous type.

Teasers indicate that Sheila’s intention of getting Brooke to unknowingly drink alcohol will work. Deacon and Brooke will engage in risky behavior while Ridge attends the party his top client is throwing out of town.

But no matter what happens to Brooke, this is B&B, where Sheila’s deeds are highly likely to be revealed in full to all interested parties. Punishment and potential banishment will follow.