The Young And The Restless LEAK: Elena and Devon Hookup In The Works? 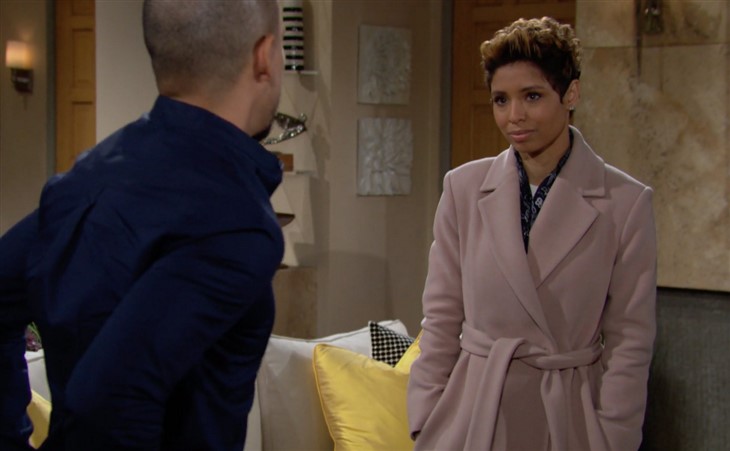 The Young and the Restless (Y&R) spoilers tease that a once steamy hook up that was dropped like a hot potato has not been forgotten, just nudged back a bit due to current events. We’re talking about Elevon and our source at CBS is hearing chatter about that couple not quite needing a fork just yet. Elena Dawson (Brytni Sarpy) and Devon Hamilton (Bryton James) looked to be the next GC supercouple which mirrored their real life status as they are in a committed relationship.

Then just like that Elena got bit by the green eyed monster and slept with Nate Hasting (Sean Dominic), deflating any chance she might have had with the boy billionaire.

The Young And The Restless Spoilers -Nate Hastings And Elena Dawson Are A Thing?

At one time it looked like Elevon were destined for soapy happiness. They were sharing their best lives, and she definitely did not look like his dead wife Hilary (Mishael Morgan). What do you know, all of a sudden and unannounced, someone popped up in Genoa City, Wisconsin who did look exactly like his dead wife Hilary. That pretty much was the death knell for Elevon.

At first shell shocked Devon wanted nothing to do with the doppelganger named Amanda Sinclair (Mishael Morgan) and he went so far as to suspect her motives and her plastic surgeon. Poor Amanda was stunned to learn she had a look alike and even more stunned to hear all about the hell raiser’s life and tragic death.

So many people were gawping at her like a zoo animal that she finally relented and had a DNA test. Viola, it showed her and Hilary to be twins, and a twisty turny storyline subsequently unspooled explaining her background and how The Tale of the Tragic Twins came to be. During this time devoted Devon held her hand and Elena got more and more insecure. She showed that usurper Amanda who was boss by sleeping with Nate. Then Elena immediately had regrets. The error of her ways and the fallacy of her thinking were lightening quick, as in while she and Nate were still naked on the patient exam apparatus. Ew.

The Young and the Restless Spoilers – Are Elevon Back On?

Our CBS inside source hears that the couple may find their way back to each other, could it have to do with his biological son Dominic? He looks ready to go for custody of the babe he donated sperm for and we have to say that people helper Elena seems a lot more child-friendly than high powered lawyer Amanda. We’ll let you know as soon as we hear more deets about this riveting rumored switcheroo.