Days Of Our Lives (DOOL) Spoilers: Susan Spooks Marlena With A New Premonition! 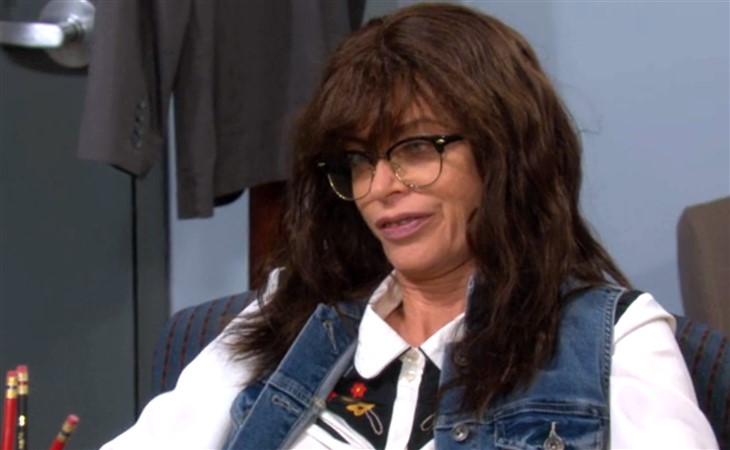 Days of Our Lives spoilers (DOOL) tease that Susan Banks (Stacy Haiduk) will spook a newly freed Marlena Evans (Deidre Hall) with a new premonition in an upcoming episode of Days of Our Lives!

Days Of Our Lives Spoilers – Marlena Evans’ Whole Family Had To Pray And Intercede To Defeat Satan!

Days of Our Lives viewers will recall that Marlena’s whole family had to pray and intercede in order to defeat Satan, as the devil had completely possessed her! Although the holy water John Black (Drake Hogestyn) threw at MarDevil definitely made her skin burn, as the invoking of God made her ears burn, Satan was still inside Marlena’s soul!

Days of Our Lives viewers will remember that Marlena’s whole family was there – John, Brady Black, (Eric Martsolf) Belle Brady, (Martha Madison) Sami DiMera, (Alison Sweeney) and even her grandchildren were present. But it took the big guns coming in as Father Eric Brady (Greg Vaughan) invoked the name of Jesus Christ to get his mother fully delivered from the demon!

Days Of Our Lives (DOOL) Spoilers: Gabi Needs Jake And Sami To Get What She Wants

DOOL Spoilers – Marlena Evans Was Hospitalized After The Exorcism

Days of Our Lives viewers will see that Marlena is released from Salem University Hospital in time for New Year’s Eve, which she spends with friends and family. Days of Our Lives viewers will see John, of course is with her and Steve Johnson, (Stephen Nichols) and Dr. Kayla Johnson (Mary Beth Evans) and they will celebrate not only the new year, but Marlena’s freedom.

Steve was instrumental in getting John and Susan Banks rescued from the DiMera crypt where MarDevil had imprisoned them, and both John and Susan, as well as Marlena have recovered. They all are breathing separate sighs of relief and look forward to a new year of peace and prosperity – until Susan gets another premonition!

By the end of the week, Susan has another premonition, and it’s about something involving Marlena herself, or possibly one of her family members! Days of Our Lives viewers can expect that it is probably not about Ben and Ciara Weston’s (Robert Scott Wilson, Victoria Konefal) baby, or Susan would have warned them directly! On the other hand, as longtime Days of Our Lives viewers will remember, Susan’s premonitions are not always really clear, and they take some interpretation! Susan’s premonition may be vague but she will assume it will affect Marlena herself, as she’ll spook Marlena as she warns her the devil isn’t done yet in Salem!