General Hospital Spoilers: Epiphany And Marshall Bond Over Their Love Of Music! 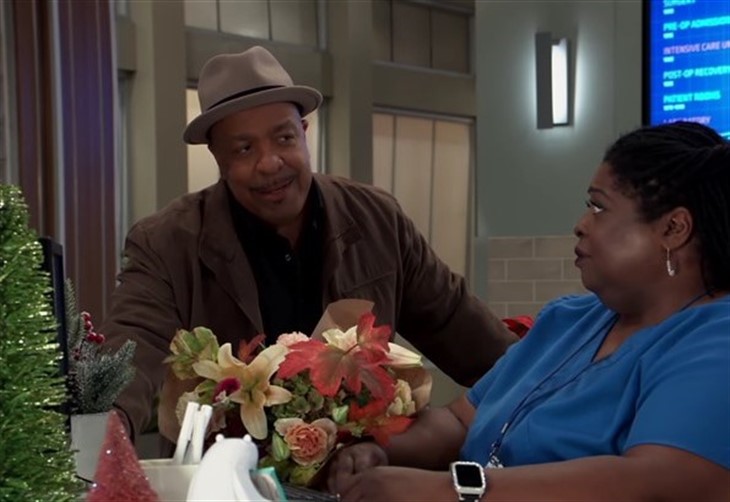 General Hospital (GH) spoilers tease that Epiphany Jones (Sonya Eddy) is quite smitten with newcomer Marshall Ashford (Roger Gossett). On Christmas Day, Marshall brought his clarinet to the hospital and along with other volunteers, played music for the patients stuck in the hospital at Christmas. Marshall even convinced a reluctant Epiphany to sing with them. Epiphany quite enjoyed herself, and patients at General Hospital were treated to their music on Christmas Day!

The next time they might, an obviously smitten Epiphany thought that Marshall was asking her out. It was a misunderstanding though, as Marshall just wanted Epiphany to help him start a band. Although disappointed it wasn’t a romantic encounter, Epiphany said she would have to check her schedule but she was interested. In the coming weeks, look for Marshall and Epiphany to get their band together and form a strong friendship. But for now, that’s likely all it will be. Marshall still has quite a bit of explaining to do to Curtis Ashford (Donnell Turner).

Marshall just showed up in Port Charles a few weeks ago under suspicious circumstances. Before he revealed himself to Curtis, Marshall appears to have had Joey Novak (Patrick Zeller) beaten to within an inch of his life. Joey had been throwing his weight around at Curtis’ club, the Savoy. Curtis through Novak out and then Marshall encountered Joey a few blocks away. The next time anyone saw Novak he had been beaten. It wasn’t long after that before Marshall told a disbelieving Curtis that he was his father.

General Hospital Spoilers – Curtis Ashford Wants To Know Where Marshall Ashford Has Been All This Time!

Curtis wants nothing to do with Marshall, at least until he can find out exactly where Marshall has been all this time. If indeed Marshall was in witness protection or somehow connected to organized crime, it would definitely be in Epiphany’s best interest not to get too close to her newfound musical partner. If Marshall’s very presence means danger, then Curtis will find out and throw him out of their lives. Hopefully, there is a good reason Marshall was gone all those years and whatever danger may have surrounded him in the past, is over now. Then perhaps he and Epiphany can become more than just friends.!

Where has Marshall been all this time? Is he a danger to those around him? Or could he and Epiphany make some beautiful music together down the road? Anything can happen in Port Charles so stay tuned to General Hospital airing weekdays on ABC. And don’t forget to check back right here regularly for all your General Hospital news, information and spoilers!