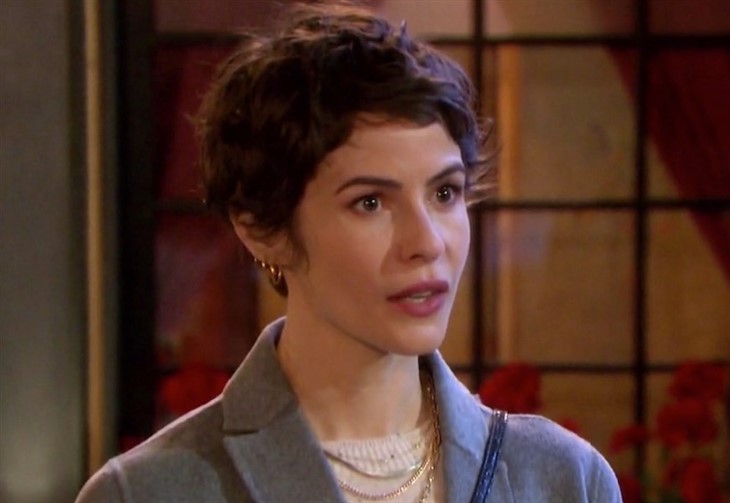 Days of Our Lives spoilers reveal that Gwen Rizczech (Emily O’Brien) is completely freaking out over Sarah Horton (Linsey Godfrey) being found. Xander Cook (Paul Telfer) joins other Salemites in the search. However, when Sarah was shipped off by Kristen DiMera (Stacy Haiduk), she was incoherent and babbling away. Will she still be insane when she’s found?

Days Of Our Lives Spoilers – Getting Rid Of Sarah Horton

DOOL spoilers reveal that Kristen had a big problem when she was seen by Sarah. At the time, Kristen was impersonating Susan Banks (also played by Haiduk) to keep Brady Black (Eric Martsolf) and Chloe Lane (Nadia Bjorlin) apart.

Days Of Our Lives Spoilers And Rumors: Chloe Reels As Her Mother Shows Up With Shocking News

Plus, Brady would like to see Kristen in prison where she belongs so he doesn’t have to worry about Rachel DiMera (Finley Rose Slater) disappearing. As for Chloe, she will continue to fear she’s in danger as long as Kristen is a fugitive.

Days Of Our Lives Spoilers – Still Incoherent And Insane?

Days of Our Lives spoilers reveal that when Sarah is found, there is no confirmation that she will be sane. In fact, she could be permanently insane due to the powerful hallucinogen she was injected with. If Dr. Rolf was accurate when he described the drug to Gwen, it can put people in a state of permanent psychosis.

Head writer Ron Carlivati teased to Soap Opera Digest that Xander makes a realization. Xander comes to the conclusion that the person who has been there for him is Gwen. Despite her secrets, lies, and shady schemes, Xander proposes to her.

However, DOOL is famous for destroying wedding days. Will Sarah suddenly become sane and show up at Xander’s wedding to Gwen? It certainly is possible and would fit the soap’s writing style. What will Xander do if that happens? Will he still marry Gwen or could he decide that Sarah is the woman he truly loves? Tell us your theories and remember to keep watching the NBC soap to see what happens next.