Days Of Our Lives Spoilers: Johnny DiDevil’s Shocking Announcement- He’s Going To Be A Father! 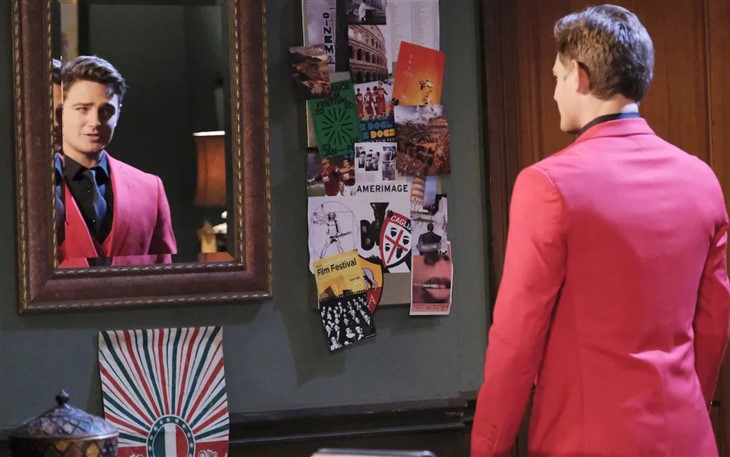 Days of Our Lives spoilers tease that Johnny DiMera (Carson Boatman) who now is also Johnny DiDevil delivers a shocking announcement in an upcoming episode of Days of Our Lives; he’s going to be a father!

Days Of Our Lives Spoilers – Those Kids Got Married Pretty Suddenly

Days of Our Lives viewers will remember that Johnny and Chanel Dupree (Raven Bowens) came back from their trip to Italy and announced they’d gotten married in a recent Days of Our Lives episode! All of their family was shocked, and undoubtedly Lucas Horton, (Bryan Datillo) Sami DiMera, (Alison Sweeney) EJ DiMera (Dan Feurreriegel) and Paulina Price (Jackée Harry) probably assumed Chanel was pregnant!

No admissions were made as to if she was or if she wasn’t, but she sure looks like she might be by the time New Year’s Eve rolls around, and she appears to be hiding her tummy! Chanel is wearing a tight, sparkly white sheath type dress with fur trim around the top, while Johnny sports a satanic combination of a red suit and black shirt, tie, and shoes.

DOOL Spoilers – The Devil’s Not Done With Salem Yet!

Viewers of Days of Our Lives will recall that after Marlena Evans’ (Deidre Hall) entire family along with the big spiritual guns of Father Eric Brady (Greg Vaughan) finally dispatched Satan from her, they thought it was over!

But little did they know there was a vulnerable individual in the room, perfect for Satan to fly into – and he did; later as Johnny and Chanel were in bed trying to get to sleep, Johnny wasn’t feeling well. Then later still, it was time to celebrate the new year, and Chanel went with Tripp Johnson (Lucas Adams) and Allie Horton (Lindsay Arnold) downstairs to wait for him. Days of Our Lives viewers will recall that Johnny dressed in the red suit and revealed yellow eyes just like MarDevil’s, and said he wasn’t done with Salem just yet!

Days of Our Lives viewers will recall that once the devil had been driven from Marlena, Ben and Ciara Weston’s (Robert Scott Wilson, Victoria Konefal) baby was no longer satan’s target and would be safe. But Satan still needed a body to inhabit and still wanted a baby to corrupt – Johnny was the perfect target, because satan himself can be the baby’s father through Johnny!

Poor Chanel – she thought she’d be spending her nights sleeping on white satin sheets with a rich guy like “Giovanni” – instead, she’s finding herself spending her nights with white Satan! Days of Our Lives viewers will have noted that from the time that Johnny and Chanel returned and even from the Christmas holiday to New Year’s Eve, Chanel ‘s baby bump appeared suddenly; possibly created by satan himself! Ciara’s not even showing yet and she’s farther along than Chanel could be!

DOOL Spoilers – Satan Wants To Brag About His Handiwork

Chanel’s baby was almost certainly created and put on a fast track by satan, through its physical father Johnny DiDevil and at the DiMera New Year’s Eve party, he’ll want to brag about his handiwork! Several DiMera family members are already staring at Chanel’s baby bump as Johnny makes the big announcement; they are shocked at how pregnant Chanel looks so suddenly as Daddy DiDevil announces he’s going to be a father!