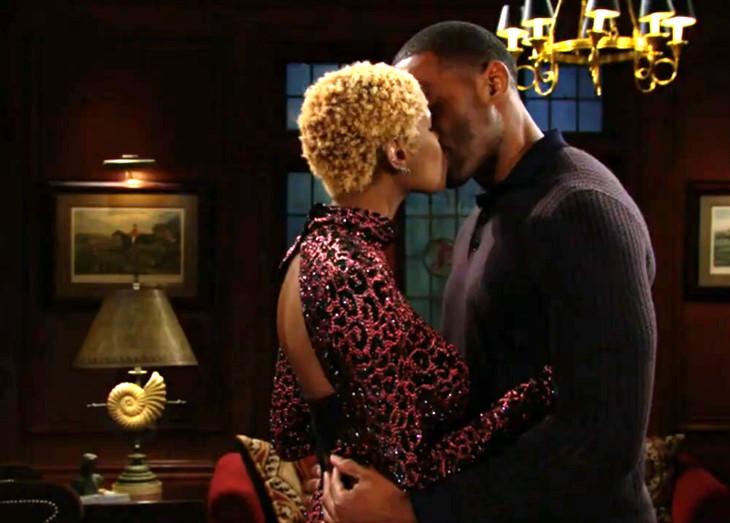 The Bold And The Beautiful (B&B) spoilers indicate that Carter Walton (Lawrence Saint-Vincent) knows that Zende Forrester (Delon De Metz) is about to propose to Paris Buckingham (Diamond White). However, this doesn’t stop Carter from kissing Paris on New Year’s Eve.

The Bold And The Beautiful Paris cares for Zende but she isn’t ready to settle down. Paris also doesn’t want to make the same mistake that her sister Zoe Buckingham (ex-Kiara Barnes) made with Carter. Zoe was engaged to Carter but was drawn to Zende and blew up their relationship. Paris doesn’t want to do the same thing with Zende. Paris doesn’t want to break Zende’s heart by breaking up with him or marrying him only to divorce him later. Paris has goals in life that are more career-oriented instead of settling down. Paris may have aspirations that reach beyond Forrester Creations as well. Paris simply wants a casual relationship and Zende wants much more.

The Bold And The Beautiful Spoilers: Taylor Wants To Help Sheila, But Is She A Lost Cause?

The Bold And The Beautiful’s Carter has already been with Zoe. Now Carter has become close to Paris as well. Carter knows how Zende feels about Paris. Carter also knows how Zende has been leery of his cousin Thomas Forrester (Matthew Atkinson) living with Paris. Zende has been afraid that Thomas and Paris may get into a relationship. However, now Zende has to worry about Carter as well. Carter already told Paris that Zende was ready to propose to her. Will Zende find out about this New Year’s kiss as well?

The Bold And The Beautiful – Paris Buckingham Comes To A Realization

The Bold And The Beautiful’s Paris will realize how much she cares about Zende after kissing Carter. Although Paris cares about Zende a great deal, she doesn’t want to get married. Paris later sees Zende kissing a Forrester model and she can’t get mad because not only did she kiss Carter, but she also wants Zende to be happy. Paris isn’t ready to give Zende the relationship he wants so if he has to be happy with someone else, she can accept that. Will Zende find love with someone new? Could Paris even accept a new job so that Zende can have a chance at true happiness?

The Bold and the Beautiful Spoilers: Paris And Carter Share A Passionate Kiss – Will Zende Find Out? #bb #BoldandBeautiful https://t.co/zLKrZFCRem

Paris doesn’t want to hold Zende back or give him false hopes. Paris just wants to have fun and enjoy herself. Paris feels that both she and Zende have plenty of time to get serious. Will Paris leave to give Zende a chance with someone else?