The Bold And The Beautiful Spoilers: Sheila Demands Repayment From Trapped Taylor! 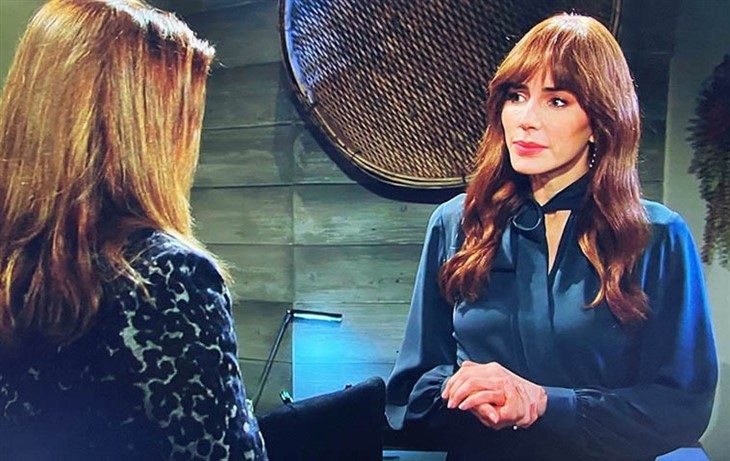 Viewers of The Bold and The Beautiful will recall that Taylor made Sheila’s Christmas wish come true, when she convinced Steffy Forrester Finnegan (Jacqueline Macinnes Wood) to invite Sheila to spend Christmas at the cliff house. Of course, Sheila didn’t have a clue that Taylor had an ulterior motive – she wanted to psychoanalyze Sheila and make sure that her claims that she was a changed woman were really true.

B&B Spoilers: Who Is Most Likely To Be Arrested In 2022 – Ridge, Brooke, Deacon, Sheila, Or Steffy?

Longtime viewers of The Bold and The Beautiful know that Taylor would never trust Sheila at face value only, so she wanted to get her in a situation where she could really get a read on her. This way Taylor would know whether Sheila had really changed or not, and if she was just a mother wanting to spend time with her grown son she’d given away years ago and her new grandson.

Viewers of The Bold and The Beautiful noticed it didn’t take very long for Sheila to revert to her former self after being backed into a corner and threatened by Brooke Forrester (Katherine Kelly Lang)! Viewers of The Bold and The Beautiful will remember exactly what Brooke said to Sheila and what Sheila said to Brooke, and how Deacon Sharpe (Sean Kanan) was there to hear it all!

Deacon thought he had averted a potential disaster when he led an angry Brooke away from Il Giardino after Sheila had interrupted their conversation in which Brooke had wanted some non-alcoholic champagne. The two women had some choice words for each other, with Sheila taking a page from Stephanie Forrester’s (Susan Flannery) playbook and Brooke threatening to make it where Sheila would never ever see her family again! But the non-alcoholic champagne gave Sheila some wicked ideas for revenge which she carried out by swapping labels between bottles of alcoholic champagne and non-alcoholic champagne!

The Bold And The Beautiful Spoilers – Ridge Forrester Will Be Supportive At First, But Then Turn Away

Viewers of The Bold and The Beautiful will see Ridge Forrester (Thorsten Kaye) be supportive at first when Brooke – thanks to Sheila’s “gift” – admits to him and her daughter Hope Spencer (Annika Noelle) that she slipped and fell off the wagon! The Bold and The Beautiful spoilers tease he’ll even go with her to her first Alcoholics Anonymous meeting for support, and possibly one or two more, but he’ll lean on Taylor for his own support.

It’s never a good idea to confide in an ex-spouse or lover about problems with one’s current spouse or lover, and that goes both ways – that’s why Brooke told Deacon to leave and never come back! Old embers can easily be reignited if there’s even just the slightest amount of warm memories in people’s internal fireplaces, and the flames can come roaring up uncontrollably when least expected! That’s one thing that the sneaky Sheila-devil was counting on when she carried out her plan!

Viewers of The Bold and The Beautiful can expect that Taylor will see Sheila’s twisted idea of a favor come to life, and she’ll know that Sheila hasn’t changed that much! Sheila will likely make sure Brooke gets a few more “mixed up drinks” to make sure Ridge loses patience with her and keeps turning to Taylor for comfort, and the comfort might turn to temptation!

Steffy isn’t the only one who knows that Taylor still loves Ridge and wants him back, but she would never try to make it happen by plotting to break his marriage up! Sheila, however, doesn’t have those kinds of compunctions and she knows Taylor and Ridge have torches for each other as well and once she’s succeeded in manipulating Ridge into Taylor’s bed, she’ll call in her “favor”! By this time, when Sheila informs Taylor she’s responsible for the favor of returning Ridge to his rightful “owner” Taylor will be trapped into doing who knows what for Sheila!