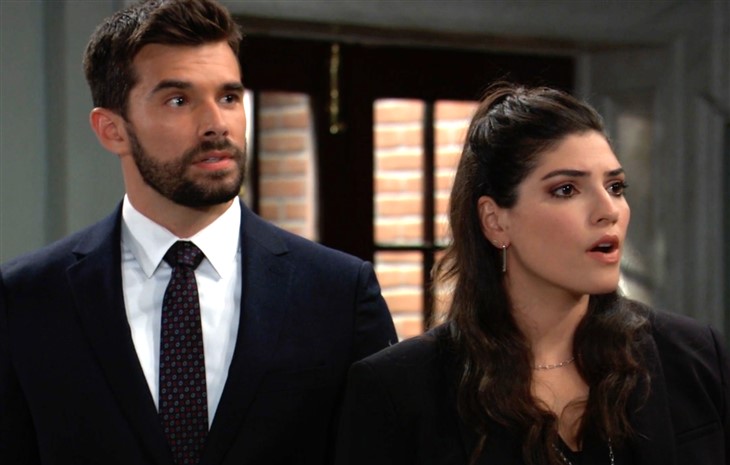 General Hospital Spoilers tease that the walls are closing in on Brook Lynn Quartermain (Amanda Setton). Not only has Tracy Quartermaine (Jane Elliot) figured out that Bailey Quartermaine (London and Jett Prinzo-Berendt) was really Louise Jones within five minutes of being in town, but now Valentin Cassadine (James Patrick Stuart) may be teaming up with his father, Victor Cassadine (Charles Shaughnessy) to get revenge on Brook Lynn for letting Valentin believe he was the baby’s father for several months. Although Brook Lynn had her own reasons for the deception, most of Port Charles is completely unaware!

While it’s true that Brook Lynn originally wanted to fool Valentin in order to get her ELQ shares back, the bigger reason is that she is trying to help keep baby Louise away from her criminal father, Peter August (Wes Ramsey). But other than Harrison Chase (Josh Swickard), and now Tracy, no one knows that Brook Lynn and Maxie Jones (Kirsten Storms) concocted the switch. This means of course that a very hurt Valentin may just agree to teach Brook Lynn a lesson. And Victor seems to enjoy doling out the harshest of punishments to those he thinks have wronged him or his family.

GH Spoilers – Victor Cassadine Is Capable Of Anything!

In recent weeks alone, Victor ordered a hit on Mayor Laura Collins (Genie Francis) and is seemingly responsible for Luke Spencer’s (Anthony Geary) death. It wouldn’t be a bit surprising if Victor has a similar fate in mind for Brook Lynn. But luckily Brook Lynn has Chase in her corner. If word gets out that someone is trying to kill Brook Lynn, Chase will do his best to protect both mother and daughter. It could easily come down to the pair going on the run with little Bailey!

General Hospital Spoilers – Brook Lynn Quartermaine Won’t Have A Chance To Give Maxie Jones A Warning.

This could happen so quickly that Brook Lynn won’t be able to let Maxie know what’s going on. Maxie will be worried sick for her daughter but won’t be able to let anyone know. Meanwhile, Brook Lynn and Chase will disappear with the baby, in an effort to stay ahead of Victor and his men. This has the potential to blow the whole baby switch sky high and even if Brook Lynn and Chase are able to bring Bailey home, it may very well tip Peter off as to the location of the baby!

What does Victor have in mind in regards to Brook Lynn? Will she and Chase have to go on the run? Where will that leave Maxie? Anything can happen in Port Charles so stay tuned to General Hospital airing weekdays on ABC. And don’t forget to check back right here regularly for all your General Hospital news, information and spoilers!