The Bold And The Beautiful Spoilers And Rumors: Deacon Disappears! Has Sheila-Devil Struck Again? 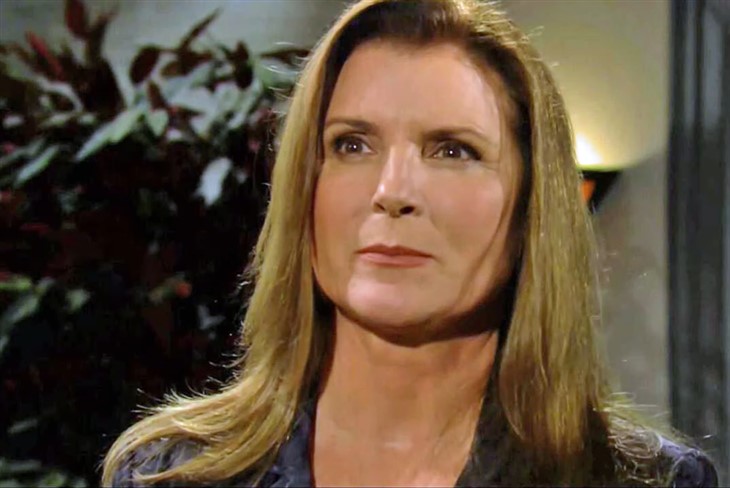 The Bold And The Beautiful Spoilers: Sheila Demands Repayment From Trapped Taylor!

Brooke had definitely overstepped, and Sheila struck on a plan – she would ruin Brooke’s life and drive Ridge Forrester (Thorsten Kaye) back to Taylor Hayes (Krista Allen) by making sure Brooke was back on the bottle! Sheila got a bottle of non-alcoholic champagne and one of regular, and switched labels, and planted the mislabeled bottle to be delivered to Brooke from Il Giardino-it doesn’t take long for Deacon to figure it out!

Ridge was supposed to come back home from a business trip, and he had called and told her he was stuck at the airport because of bad weather, and Brooke started drinking the champagne! Deacon hadn’t quite behaved himself either, since he let Brooke talk him into drinking vodka shots with him – and after she banished him from her life and home, he got to thinking back earlier. Deacon remembered the ugly fight and that Sheila knew about the non-alcoholic champagne, and he confronts her with his suspicions that she somehow made a switch between the bottles, which of course is right on target!

The Bold And The Beautiful Spoilers And Rumors – Deacon Sharpe Has Seemingly Disappeared From The Face Of The Earth!

Viewers of The Bold and The Beautiful can imagine that Hope will be the first to realize her birth father has seemingly disappeared from the face of the earth, and asks her mother about him! Viewers of The Bold and The Beautiful will recall that Hope was shocked to find out that her father was suddenly on her mother’s blacklist and had questioned her big turnaround, which Brooke was not able to explain very well!

Brooke acted like she’d always been mistrustful of Deacon and it wasn’t Ridge, it was her who made him persona non grata all of a sudden – Hope, of course, didn’t buy it! Deacon is nowhere – no one has heard from him and no one has seen him; Ridge of course assumes he’s off on another drunk and tells Hope he warned her about this! He’s not even at work – and Hope knows this is not like her father and is ready to file a missing persons report; has Sheila-devil struck again?