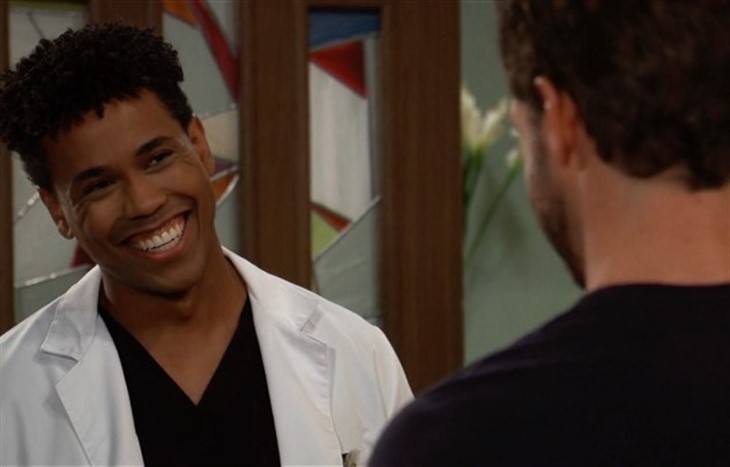 General Hospital (GH) spoilers and updates tease TJ Ashford (Tajh Bellow) is concerned about a friend. TJ has been concerned about Brando Corbin (Johnny Wactor). TJ and Brando have been able to put their past behind them. TJ was able to forgive Brando for having a one-night stand with his domestic partner Molly Lansing-Davis (Haley Pullos). TJ was happy that Brando found love with Sasha Gilmore (Sofia Mattsson). TJ wants to help Brando to be able to find a way to cope with a devastating loss.

Brando had hoped to have a bright future with Sasha and his son Liam Corbin ((no actor’s name known for this important role). Brando was looking forward to becoming a first-time father. Brando had helped Dev Cerci (Ashton Arbab) in the past when he needed to be kept safe. Brando had pretended to be Dev’s father to help him.

Brando was heartbroken when Dev was killed. Brando thought that Liam could be saved but he and Sasha had to make the choice to let Liam. Brando has wanted to take care of Sasha but she has been keeping her distance from him. Brando has been getting support from his mother Gladys Corbin (Bonnie Burroughs). Brando has been grateful that TJ wants to help him with his loss. TJ may believe that Brando needs to find a way to vent his frustrations and grief to help him to heal.

TJ has wanted to have a relationship with his grandfather Marshall Ashford (Robert Gossett). TJ was shocked to find out that Marshall was alive. Marshall had made everyone that he cares for believe that he was dead for decades. Marshall has been trying to find a way to connect to the ones he loves especially his son Curtis Ashford (Donnell Turner). TJ wants to help Marshall and Curtis to reconnect. TJ is hoping to find a way to bring his family together. TJ may be able to get Brando to help him to figure out a way to unite his family. Brando understands that family relationships can be complicated. Brando and Gladys have had their problems in the past. Brando could help TJ to decide what he might need to do to help Marshall to be a father to Curtis again.

General Hospital Brando needs to get his feeling out. Brando may decide that he should go to Volonino’s Gym to express his anger. TJ may join Brando at the gym to help him to be able to clear his head. TJ hopes that Brando will be able to find a way to deal with his grief over losing Liam. Can TJ help Brando to come to terms with the loss of his son? Brando will want to help TJ to figure out what to do about Marshall.

Can Brando help TJ to decide on the right course of action that he needs to take to be able to have Marshall in his life? Brando and TJ may find that they are able to help each other with their problems. Will Brando and TJ be able to solve the problems they are having with their loved ones? Be sure to catch up on everything happening with GH right now. Come back here often for General Hospital spoilers, news, and updates.