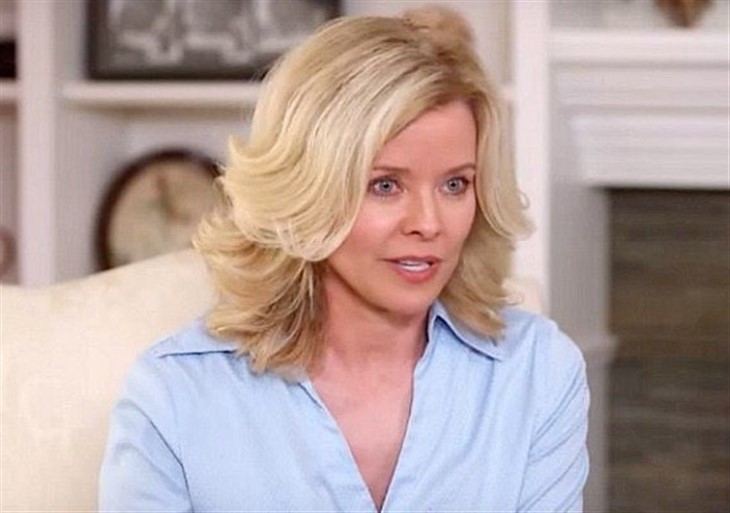 General Hospital’s Kristina Wagner is back on contract at GH as Felicia Scorpio. Other than finding Maxie Jones (Kirsten Storms) baby, what else is going on with Felicia?

General Hospital’s Kristina first appeared in Port Charles in 1984. Kristina has come and gone several times since then. Kristina admits that when 2020 rolled around, she wasn’t exactly interested in seeing if this was going to become a threat to her. Kristina says that she was invited to attend Maxie and Peter August’s (Wes Ramsey) wedding but she was hesitant. Ultimately, Felicia ended up not being there to support her daughter.

Wagner agreed to come back in 2021 for Sean Donely’s (John Reilly) memorial. Of course, Kristina was thrilled that the show’s producers honored their relationship. Wagner reveals that at the time she needed something to occupy her mind and the timing was right. Wagner says that coming back to the show at that time was riveting. Wagner is thrilled to be back to work at this time.

General Hospital’s Wagner has been impressed with the safety protocols set up by the executives on the G.H. set. Wagner says she is impressed with the steps taken by the network and Disney to protect their employees. Wagner says she has had some great reunions with her coworkers on the set. Wagner says that being back at work means you better get ready to jump on the treadmill because they are about to get moving. Wagner is thrilled to be working with the actors she has spent so much time with in the past and refers to them as family.

General Hospital’s Kristina was a little behind on the goings-on at the show. Wagner says that Google comes in very handy when you haven’t been on set in a while. Wagner says you just type in what you want to know and Goggle pulls it up.

Felicia fans cannot wait to see what the writers have in store for her now. Will Felicia figure out where her grandbaby is and put her in danger by accident?