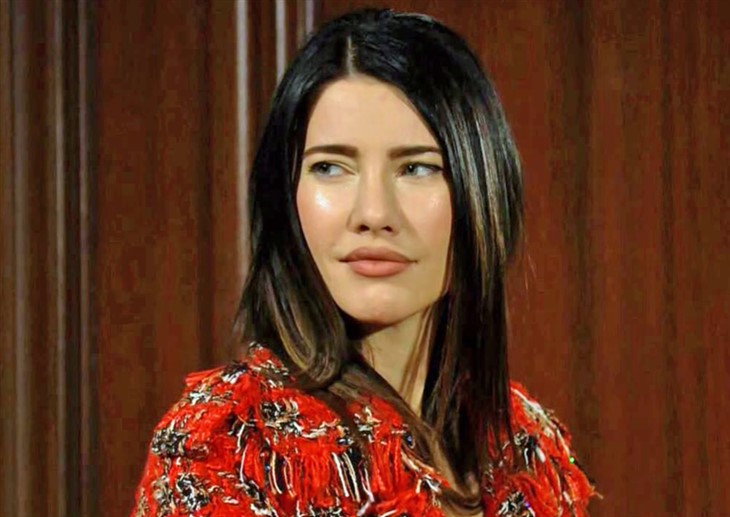 The Bold and the Beautiful spoilers document Steffy Forrester Finnegan (Jacqueline MacInnes Wood) does not take kindly to Hope Spencer’s (Annika Noelle) advice. The ladies resolved their differences which centered on Liam Spencer (Scott Clifton) in recent years. A parent-based battle has become the new source of contention.

Steffy and Hope forged a true blended family alliance within recent months. The marriage to John Finn Finnegan (Tanner Novlan) was the reason why Steffy was able to move past her Liam doldrums and linked rivalry with Noelle’s character.

Steffy has seen this soap before. She knows that her father is off-center because Brooke is creating drama. So, Hope’s warning will be instantly rebuked.

Taylor is perceived to have lost Ridge to Brooke. That injustice has long needed to be resolved, in Steffy’s opinion. Her brother, Thomas Forrester (Matthew Atkinson), feels the same.

So, how will Steffy and Taylor respond to the intel they will soon learn about Brooke’s alcohol relapse?

Brooke’s issue is unexpected and deeply unsettling. Hope did not initially know why her mother did an about-face, stating that Deacon Sharpe (Sean Kanan) was no longer allowed in the main house. But the relapse reveal begins to shine a light on the truth.

The audience knows that Deacon screwed up. Impulse and old habits enabled him to drink with Brooke on New Year’s Eve when he should have stopped her.

Hope will be further drawn into her parents’ troubles when Deacon’s role in Brooke’s relapse is exposed. That reveal will re-ignite Ridge’s rage and create an unknown set of outcomes.

The Bold And The Beautiful Spoilers – Taylor Hayes Is Not Involved

Taylor can not be blamed by anyone for causing Brooke’s problems. She is not linked to Deacon’s behavior, either. Plot developments will demonstrate whether Taylor’s choice to open the door to Sheila Carter (Kimberlin Brown) proves right.

Ridge is Taylor’s true love. However, she has respected his marriage boundaries. That is the moral choice.

Hope’s concerns are real. Steffy’s hopes are the same.

All Taylor needs to do is remain patient. Brooke’s actions should send Ridge back to Taylor of his own accord.