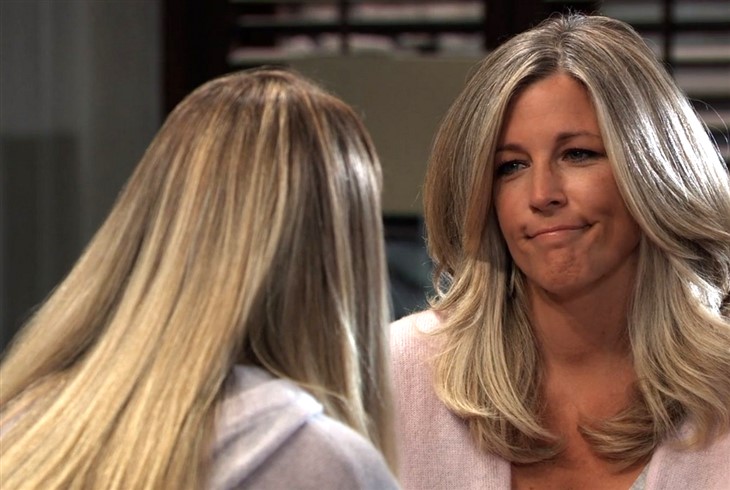 General Hospital Spoilers tease that Josslyn Jacks (Eden McCoy) may have more than one reason to move out of the dorms at Port Charles University. First of all, her mother Carly Corinthos (Laura Wright) is in quite a bit of emotional pain. Carly just found out that her husband, Sonny Corinthos (Maurice Bernard) had a relationship with Nina Reeves (Cynthia Watros) while he was suffering from amnesia and living in Nixon Falls. Even worse, Sonny, even though his memory is restored still has some kind of feelings for Nina.

Josslyn won’t want her mother to be alone while she is going through something so emotional. Carly will certainly have her younger children with her, but they won’t be much help emotionally for Carly. So Josslyn may offer to stay with her mother temporarily while she deals with the possible end of her marriage. But that won’t be the reason that Joss won’t be returning to the dorms.

GH Spoilers – Esme Price Has A Devious Plan In The Works!

As viewers know, Esme Prince (Avery Kristen Pohl) and Josslyn don’t really get along. Even through they try to remain mostly civil, it is obvious that Josslyn has no use for Esme and has made that quite clear to the Port Charles newcomer. Esme recently picked up a prescription from General Hospital that according the pharmacist, is quite potent. But Esme isn’t planning to use the drugs on herself, instead giving both Trina Robinson (Sydney Mikayla) and Cameron Webber (William Lipton) each a dose. Esme’s goal is to make it look like Josslyn’s boy friend and best friend are sleeping together. Esme will likely arrange for both Spencer Cassadine (Victor Chavez) and Josslyn to discover the pair in bed together. This will likely be the reason Joss moves out of the dorms and away from Trina, permanently.

General Hospital Spoilers – The Truth Will Eventually Come Out.

Esme’s plan will likely succeed at least temporarily. Joss will probably return to Carly’s and will make sure her things are removed from the dorm before Trina gets back. Cameron and Trina will likely not be able to defend themselves since they won’t remember what happened or how they ended up in bed together. But eventually, Esme’s house of cards will begin to fall. But look for Josslyn, Cameron and Trina’s relationship with each other to be forever changed, even once the truth comes out.

Should Joss move back in with her mother? Will Carly need Josslyn’s support at home? Will Esme’s evil plans succeed? Anything can happen in Port Charles so stay tuned to General Hospital airing weekdays on ABC. And don’t forget to check back right here regularly for all your General Hospital news, information and spoilers!