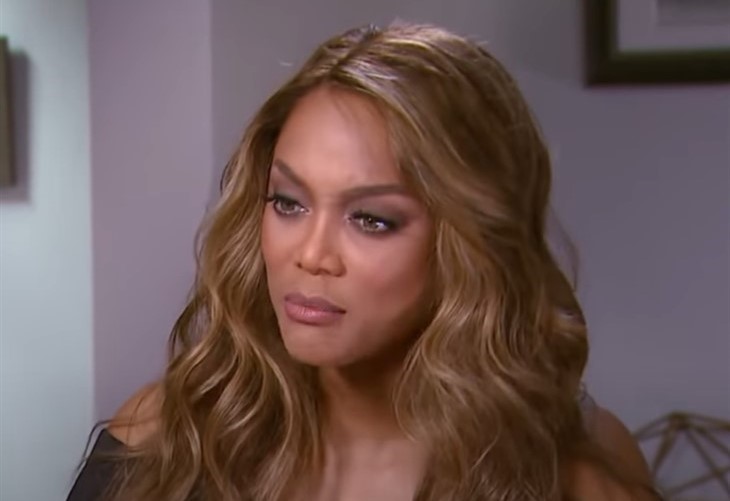 Dancing With The Stars (DWTS) host Tyra Banks celebrated the New Year on Instagram. And in her post, the DWTS celebrity showed off what she sees as her own attributes, encouraging her fans to see their own self-worth at the same time. But the boast comes amid a backlash over the show itself.

Find out how Tyra’s fans responded to her flaunting Instagram photo below. Plus see if you think she’s really to blame for the ongoing Dancing With The Stars backlash.

Dancing With The Stars Host Tyra Banks Shows Off On Instagram

Beauty: Check. Booty: Check. And don’t forget those brains! To celebrate 2022, DWTS host Tyra Banks shared an Instagram pic with a clear message. “You got beauty, you got booty, you got brains!” she cheered to her followers.

And to live life with Tyra’s self-confidence, she even offered advice. “Repeat this three times,” Banks told her Instagram fans. “Don’t feel like you can’t reach your dreams. It’s a new year,… a new you. You got this.”

Fans seemed thrilled at the encouraging words. “Yesss,” responded one of Tyra’s followers with a heart-shaped emoji. And another added, “I know that’s right!” A third chimed in, “Love you so much, you are so inspiring!”

Who’s To Blame For Dancing With The Stars Ratings Collapse?

But while Tyra Banks cheered her “beauty, booty, and brains” on Instagram, the Dancing With The Stars host repeatedly has faced blame for lower DWTS ratings. For instance, last season, Tyra turned to Instagram to urge DWTS viewers to turn on the show. 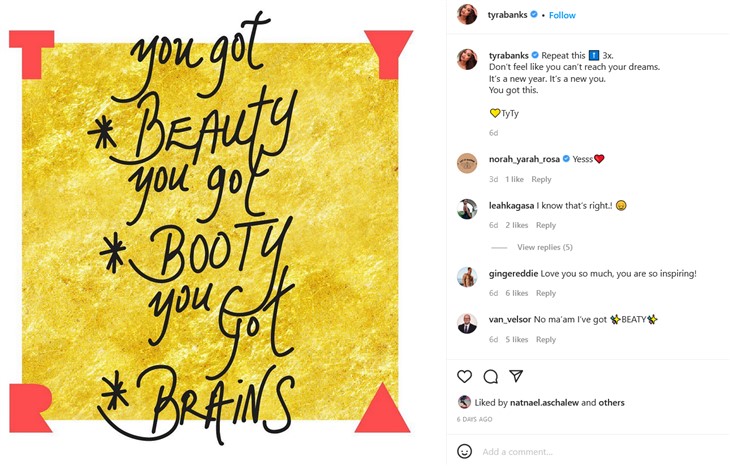 “Fire this week. Turn on your TV. @dancingabc is on NOW!” motivated Banks. But in response, the DWTS host faced a backlash over her appearance. “Wow you don’t look good at all,” slammed one viewer. “Do you see yourself in the mirror before getting on stage. These outfits are soooooo ill- fitted and poorly made. And last episodes was soo sad too. Sorry your face is so stunning. But your outfits are just as sad,” bashed the fan.

However, Dancing With The Stars execs reportedly do not blame Tyra Banks for the falling ratings. Fans urge DWTS producers to fire her. But the executive team blames the talent, not Tyra, for the lack of success, an insider told the Sun.

Producers feel “too scared” to talk about the worrying ratings, according to the source. And with Tyra serving as an executive producer, producers shift the blame for low ratings to this year’s contestants. “This has been a testing year certainly with the audience numbers and the fan reactions,” admitted the insider.

What do you think? Do you believe that Tyra Banks should take responsibility for DWTS low ratings? And after you’ve shared your views, check back on our site for more celebrity and DWTS news!