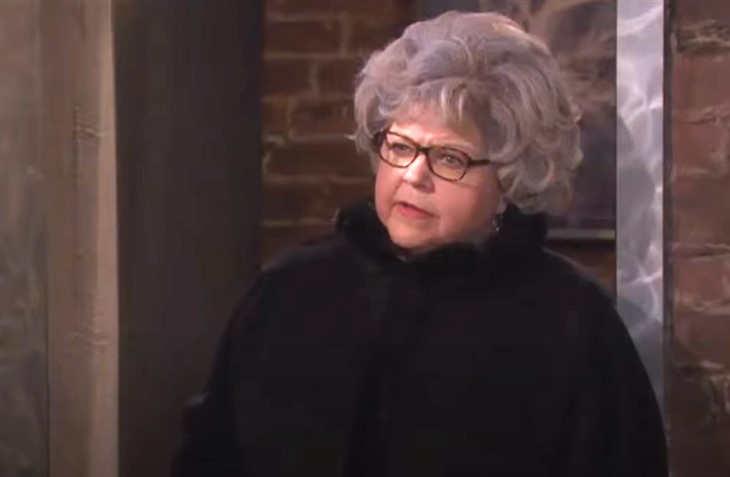 Days of Our Lives spoilers tease that Nancy Wesley, (Patrika Darbo) returns with shocking news for her daughter Chloe Lane (Nadia Bjorlin) and her story plays out in upcoming episodes of Days of Our Lives!

Days of Our Lives viewers will remember that while Brady Black (Eric Martsolf) and Chloe talked at Brady’s Pub in a recent episode of Days of Our Lives, Chloe had a call from her mother earlier while still at Basic Black. Chloe was unable to take the call at the time, because they were in the middle of something important, but then when they went to the pub afterwards Nancy showed up in a near panic!

Days Of Our Lives Spoilers: Ava Plays Mind Games With Rafe As His Detective Skills Fail Him

Chloe is shocked as her mother asks why she didn’t answer her phone, and notes that she’s frantic, hurt and upset; she asks what’s wrong, and after thirty something years of marriage, she’s convinced her husband is cheating on her! Both Chloe and Brady, who is still with Chloe, tell Nancy she shouldn’t jump to conclusions – Chloe is convinced that her father wouldn’t cheat on her mother, and implores her to talk to him instead of running away.

Days of Our Lives viewers will see Nancy telling Chloe and Brady that her husband, Craig Wesley (Kevin Spirtas) doesn’t seem as warm and attentive towards her, and Chloe knows she must take some action. Days of Our Lives viewers may see Nancy actually saying that Craig seems cold and that he no longer listens to her; which doesn’t necessarily indicate an affair, it could just indicate Craig is under a lot of stress! Longtime Days of Our Lives viewers will remember that Nancy and Craig have always had a happy marriage, and Chloe cannot figure out where her mother is getting the idea that he’s having an affair! As Nancy is thinking about what her daughter has said and what she has advised, Chloe calls and leaves a message for her father, who probably doesn’t even know that her mother has come to Salem!

Days of Our Lives viewers will see that Craig responds to his daughter’s call and Chloe’s urgent message that Nancy is in Salem and in distress, and he surprises both of them when he arrives in Salem later in the week! Days of Our Lives viewers will be able to tell, that obviously, Craig is very concerned about the whole situation and why Nancy would think he’s cheating on her after all these years!

Longtime viewers know that Craig and Nancy have been through some pretty rough times over the years, including Chloe’s need for a bone marrow transplant as a little girl, and their having a little sister for Chloe who was her donor! But that was years ago, and they have had many happy years together since then; both Chloe and Craig may be mystified as to where Nancy would get such an off the wall idea! But as most Days of Our Lives viewers know, especially those of a certain age, couples sometimes come to take each other for granted, and that’s where this suspicion of Nancy may be coming from!