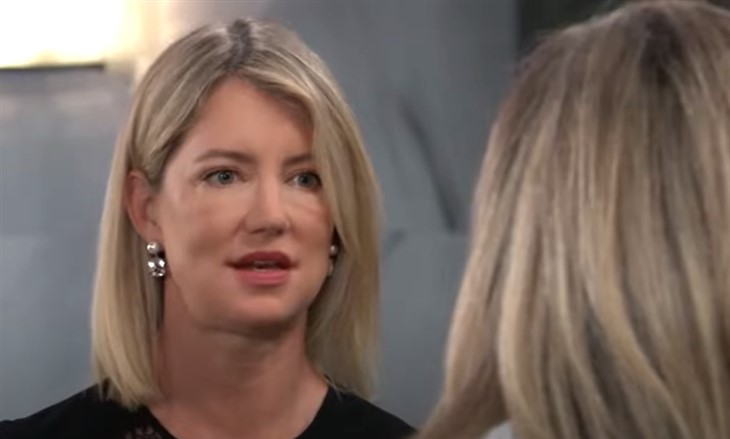 General Hospital spoilers tease that Nina Reeves (Cynthia Watros) will find that Carly Corinthos (Laura Wright) has moved out in an upcoming episode of General Hospital!

General Hospital spoilers tease that Britt Westbourne (Kelly Thiebaud) will seek out her cousin Nina for a favor involving her friend Brad Cooper (Parry Shen) who as General Hospital viewers will recall is Britt’s best friend. Viewers will recall from a recent episode that Brad confessed to Britt that he had been pushed by his aunt Selina Wu (Lydia Look) who’s currently out of town, to poison Peter August (Wes Ramsey)!

Brad’s ulcer was acting up as he told Britt that he is scared of his aunt, and she wanted Nina to see if she could get Sonny Corinthos (Maurice Benard) to pressure Selina to lighten up on Brad! Nina had to decline, telling Britt that she is in no position to ask anything of Sonny, let alone a favor like that, and so Britt calls Sonny’s house herself from Nina’s office.

General Hospital viewers will remember that Carly moved out, and she is now staying at a suite in The Metro Court, which she co-owns with Olivia Quartermaine (Lisa LoCicero). General Hospital viewers will recall Carly is coming by the Corinthos compound in the morning and in the evening to attend to the younger girls, Avery Jerome-Corinthos (Ava and Grace Scarola) and Donna Corinthos (Arya and Ayla Dormiani). She doesn’t want them to think Sonny has “died” again, but she doesn’t want them to wonder why Mommy isn’t there either, which is wise; they don’t need any more insecurity or fear in their young lives.

Britt finds out in the process of her call to the Corinthos compound that Carly no longer lives there, and so Sonny is there by himself, other than the guards, the nanny, and the two little girls. Britt tells Nina what she found out about Carly’s moving out, and Nina braces herself for even more confrontations from Carly, having just been accused of an affair with Sonny in Nixon Falls!

General Hospital (GH) Spoilers: Selina Wu is Gone From Port Charles, But Is It For Good? https://t.co/JOUKJ6Wn3v #GeneralHospital #GH

Because of all the hatred and vitriol from Carly that she gets every time the two of them run into each other, Nina can’t even allow herself to think that Sonny loves her! But all Nina feels like she can do now is keep telling herself Sonny wants to make up with Carly and he loves his wife, period, and nothing can change that, no matter how much Nina may want it!