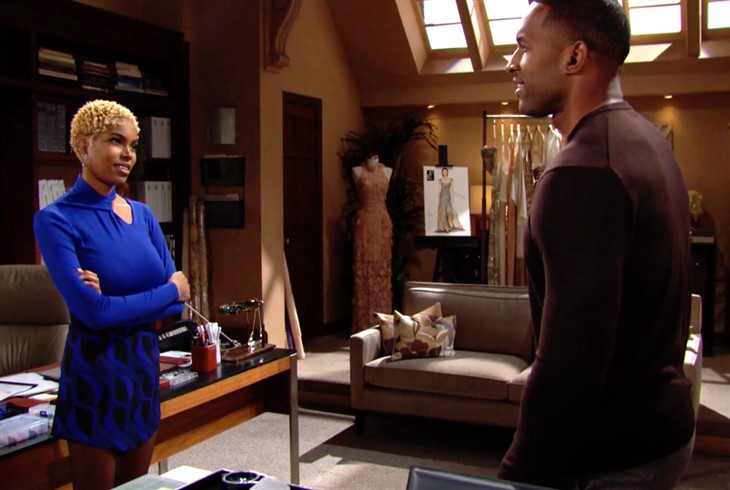 Viewers of The Bold and The Beautiful will recall from recent episodes of The Bold and The Beautiful that Paris was given a heads-up on Zende’s marriage proposal by Carter, who was in the know. Zende had an extravagant and beautiful engagement ring made for Paris by Quinn Forrester (Rena Sofer) and he’d planned to give it to her at an equally extravagant dinner, but he wound up not proposing!

The Bold And The Beautiful Spoilers: Hope Continues To Pressure Liam To Keep Quiet About Mom’s Relapse

That was because of the warning from Carter to Paris, and she had steered the conversation towards her wanting to stay single for a while and not being ready to marry, which of course avoided the problem. But it seems that Paris is not ready because she’s discovered she’s more into Carter than she is into Zende, having shared an unexpected but passionate kiss previously, and they share one again!

Someone like Carter might feel safer to Paris than someone young and possibly flighty like Zende, even though he certainly talks a good game and works to impress, so she’s just kind of falling into things with Carter. It could be kind of risky, because she really hasn’t broken up with Zende per se, and she kind of feels a little bit lost and unsure– she doesn’t want to hurt Zende but she feels like she’s inadvertently leading him on.

Viewers of The Bold and The Beautiful will see something happen that will push Paris to decide between Zende and Carter- she walks in Zende being asked out by one of the beautiful Forrester models! Paris knows she isn’t ready for marriage, and feels she made the right choice and yet she was taken aback by what she saw, which isn’t surprising, even though he’s not the one asking the model out!

Paris still feels kind of torn between Zende and Carter, but she realizes she cannot have it both ways – if she doesn’t want to marry Zende she can hardly stand in his way of dating someone else! She deals with that in her own way – which will be to sneak another passionate kiss with Carter, and doesn’t care who sees! Paris knows she can’t have her cake and eat it too, but she thinks that doesn’t mean she can’t have a piece of pie instead, so to speak!