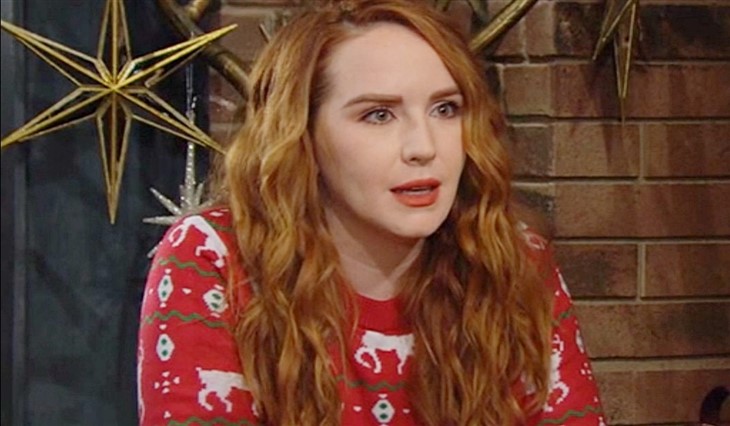 The Young and the Restless(Y&R) spoilers and updates tease Mariah Copeland (Camryn Grimes) will have some interesting possibilities. Mariah has been getting her life back together. Mariah had been trying to move on after she had given birth to Dominic Phillip Newman-Abbott-Chancellor (River and Rainn Ware).

Mariah had been the surrogate to Abby Newman (Melissa Ordway) and Chance Chancellor (Conner Floyd) Abby had turned to Devon Hamilton (Bryton James) to be the donor so that she could realize her dream of becoming a mother. Mariah had trouble stepping aside so that Abby could be a mother to Dominic. Mariah has been given support with her feelings for Dominic from her girlfriend Tessa Porter (Cait Fairbanks). Mariah has felt she is ready for a new start to her life.

Mariah and Devon have been concerned about Dominic. Devon has been worried that Chance is not ready to be a father to Dominic. Chance had been out of the country on an undercover mission that ended tragically. Chance has been struggling to get over losing his fellow agents in an explosion. Abby was told that Chance had died in the explosion but she did not believe that Chance was gone. Abby went to find Chance to bring him back home. Abby turned to Devon to take care of Dominic when she went to get Chance. Devon started to feel connected with Dominic while Abby was away.

Devon has wanted to respect Abby and Chance being Dominic’s parents but wants to have spend more time with his biological son. Devon has asked his girlfriend Amanda Sinclair (Mishael Morgan) to help him get to have joint custody of Dominic. Devon may want to get Mariah’s help to become a more important part of Dominic’s life. Mariah may decide to help Devon.

Mariah had wanted to pursue the possibility of becoming a mother to her own child. Mariah has wanted Tessa to agree to having a child. Tessa had been reluctant to becoming a mother but has decided that she was ready to take the steps to having a child. Tessa and Mariah have decided to adopt a child. Mariah is excited to be going to become a mother. Mariah wants to have a long and fulfilling future with Tessa. Tessa may decide that she wants to make a commitment to Mariah. Tessa may ask Mariah to marry her. Mariah would be overjoyed to get a proposal from Tessa.

The Young and the Restless Spoilers – Mariah Copeland Takes Control

The Young and the Restless Mariah wants to be in charge of her destiny. Mariah wants to make sure that Dominic is taken care of. Mariah may believe that Devon needs to have joint custody of Dominic. Will Mariah help Devon to get to have a more important place in Dominic’s life? Mariah wants to be a mother and have a bright future with Tessa. Will Mariah be able to have the life that she dreams of with Tessa? Be sure to catch up on everything happening with Y&R right now. Come back here often for The Young and the Restless spoilers, news, and updates.