General Hospital Spoilers: Spencer Becomes A Target, He Tries To Stop Esme From Drugging His Friends? 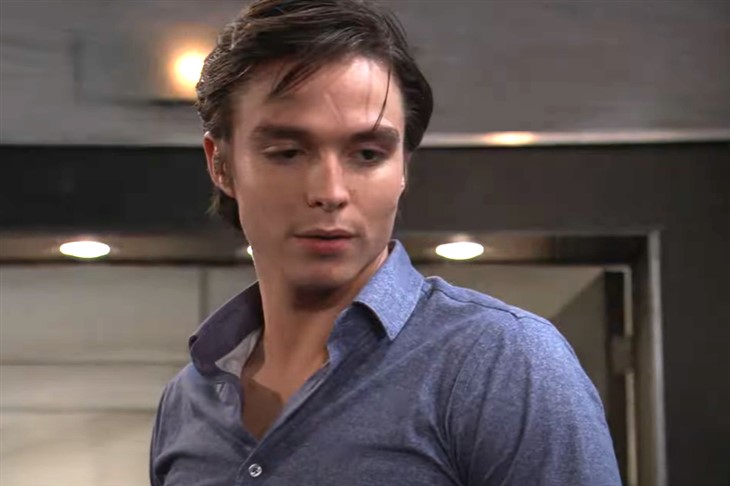 General Hospital spoilers and rumors tease that Spencer Cassadine (Nicholas Chavez) may himself become a target when he tries to stop Esme Prince (Avery Kristen Pohl) from drugging his friends in upcoming episodes of General Hospital!

General Hospital viewers will recall that Esme picked up a prescription from General Hospital with apparently evil intentions, and it wasn’t the first time she’s used the substance, as she told the General Hospital pharmacist. Esme has been chomping at the bit for the weekend getaway at the Corinthos cabin that she, Spencer, Josslyn Jacks, (Eden McCoy) Cameron Webber (William Lipton) and Trina Robinson (Sydney Mikayla) have been planning.

The pills Esme picked up are part of the preparation for the trip, and she has a targeted use for them – she wants to play a game, and the pills are part of her game. Esme’s already picked the winners and the losers though, and if anyone tries to interfere, that person becomes one of the losers, and it could even be Spencer himself if he’s not careful – Esme doesn’t like her plans interfered with!

GH Spoilers And Rumors – Spin The Bottle With A Malicious Twist

General Hospital viewers will remember how Harrison Chase (Josh Swickard) became a victim of spin the bottle with a malicious twist; Peter August (Wes Ramsey) had poisoned a cup of coffee intended for Hamilton Finn (Michael Easton). He hadn’t counted on Chase and Finn’s family playing a coffee game similar to spin the bottle at Bernadino’s Italian Restaurant that night, and instead of Finn getting dosed, it was Chase!

General Hospital viewers may see something similar planned with Esme’s game, only she’ll be the one in charge of the “game”, which is also bound to have a malicious twist-the twist being her spiking the drinks with the pills! However, Spencer might see what she’s doing or he might find the pills and he’ll likely have some serious questions about his girlfriend’s intentions, since he doesn’t want to be implicated in a possible crime – he already has a criminal record!

General Hospital viewers may have noticed that Spencer cares about his friends – he is no longer the selfish brat he was who considered himself too good for “the townies” as he did when they all were kids! General Hospital viewers will have also noticed that he cares just a little bit more about one certain friend – someone he didn’t know when they were children, because she didn’t live in Port Charles then.

That, of course, is Trina, who Spencer cannot hide his attraction to from Esme – and that makes Trina a problem that needs to be dealt with, as does Josslyn, who Esme knows is a big threat because Josslyn is on to her! Cameron is also a threat since he might step up to protect Joss, but there is a very good possibility that Spencer himself will be a target as well because of trying to stop Esme from hurting the rest! Esme doesn’t seem to think ahead to the consequences of her being caught – and she knows “Spence” won’t cover for her this time!