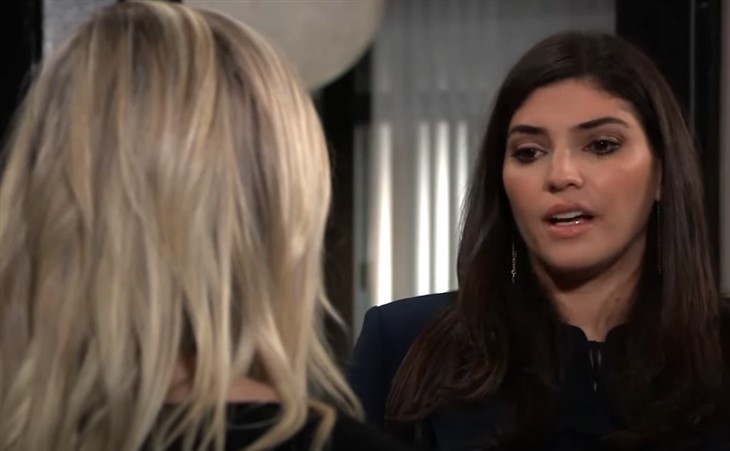 General Hospital spoilers and rumors tease that Britt Westbourne (Kelly Thiebaud) and Maxie Jones (Kirsten Storms) could go on the run together in upcoming episodes of General Hospital. They could possibly take baby Bailey Quartermaine aka Louise Jones (London and Jett Prinzo-Berendt) with them to keep her safe from Peter August (Wes Ramsey)!

General Hospital viewers may have seen the tweet from Kelly Thiebaud and the Instagram story from Kirsten Storms that they had contracted covid. Both actresses were fully vaccinated and had booster shots, as Disney requires, and Kirsten thought she had bronchitis and tested positive, and Kelly tweeted only a few days later that she had tested positive as well.

General Hospital Spoilers: Spencer Becomes A Target, He Tries To Stop Esme From Drugging His Friends?

This happened during the tail end of their General Hospital winter filming break, which was extended for a week because of – you guessed it, covid, the one of the omicron variety! Since Disney will not allow them to film until completely covid-free, that could provide an opportunity for a storyline that would be perfect considering their characters are closely connected.

Kelly, as Britt Westbourne was the late Nathan West’s (Ryan Paevey) older sister, although they were raised as cousins; and she’s also Peter’s half-sister, making her Louise’s aunt, and Kirsten, as Maxie Jones of course is the baby’s mother.

General Hospital viewers will have noticed in recent episodes that more and more people are figuring out that Bailey Quartermaine is really Louise Jones, and her safety net is diminishing! Brook Lynn Quartermaine (Amanda Setton) and Harrison Chase (Josh Swickard) moved from the Quartermaine mansion with the baby to Jasper “Jax” Jacks’ (Ingo Rademacher) house which he isn’t using to make things safer for the baby.

But General Hospital viewers also will have noticed that Victor Cassadine (Charles Shaughnessy) was tasked by Peter to find Louise, and this in exchange for Peter providing him with the key for controlling Drew Cain (Cameron Mathison)!

Victor will make a discovery and he’ll check in at General Hospital to make an inquiry, while Britt will give Peter some news – this could all be coming together in upcoming episodes to cause Brook Lynn and Maxie to re-evaluate their plan. Peter’s news from Britt will likely be that he has healed sufficiently from the poisoning and the coma he was in for his transport back to Pentonville Infirmary, but might Victor have arranged for him to be re-routed?

General Hospital Spoilers: Nina Knows That Carly Is On To Something #GH #GeneralHospitalhttps://t.co/Mz170EUPJL

General Hospital viewers will remember that when Maxie was still pregnant with Louise and had realized Peter was not who she thought he was, she had a circle of protection. That circle included Britt, Nina Reeves (Cynthia Watros) and Liesl Obrecht, (Kathleen Gati) all relatives of Nathan.

General Hospital viewers can imagine that since Maxie has not brought her own parents into her confidence concerning Louise, nor Anna Devane (Finola Hughes) that if there are new threats coming from Peter being on the loose a last minute plan will be needed! That last minute plan may well be Britt and Maxie teaming up and going on the run and the baby along with them, which would explain the actresses’ absence from the show!