The Bold And The Beautiful Spoilers: Sheila Opens The Door – Taylor Learns About Drinking And Deacon? 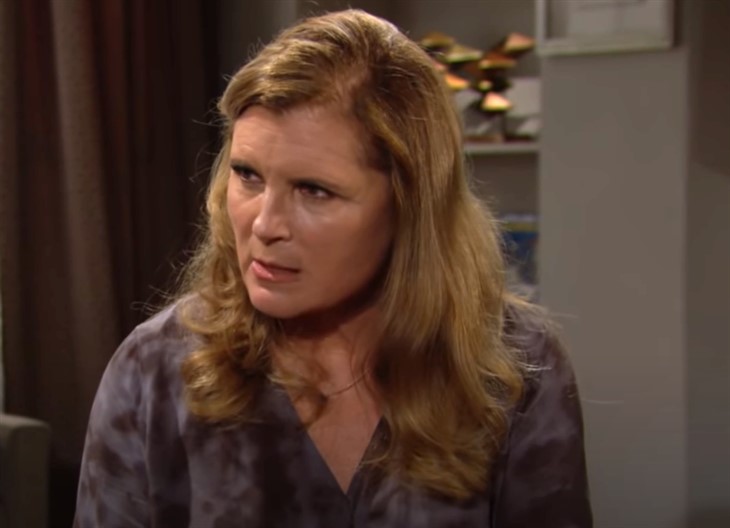 The Bold and the Beautiful spoilers document Sheila Carter (Kimberlin Brown) knocked before she entered Taylor Hayes’ (Krista Allen) office, which is in a downtown skyscraper in Los Angeles, California. But more than that physical door opened as Sheila entered.

Taylor thought that Sheila was trying to persuade her to encourage John Finn Finnegan (Tanner Novlan) and Steffy Forrester Finnegan (Jacqueline MacInnes Wood) to open their hearts. Instead, Sheila had another angle.

Brooke Logan Forrester (Katherine Kelly Lang) remains on Sheila’s mind because she does not know what happened on New Year’s Eve or what has followed since then.

Brooke is obsessing about drinking with Deacon Sharpe (Sean Kanan) and waking up to him laying aside of her the next morning. Yes, nothing retro romantic happened. But that is no solace to Ridge Forrester’s (Thorsten Kaye) loving wife.

Deacon’s return to the mansion, which followed him and the Spencer’s leaving, was followed by an old-school drinking session. Deacon was too weak to stop himself or Brooke.

The guilt Brooke is feelings is palpable. Yet, she has been able to keep her secret contained.

Taylor was at the cliff house with Steffy when Hope Spencer (Annika Noelle) issued a not-so-thinly veiled warning. Hope told the ladies not to involve themselves in her mother’s marriage.

The statement affirmed Steffy’s suspicions about Brooke creating a recent scandal. Neither Steffy nor her mom knows the details, and Ridge is reluctant to share them.

The effect of Hope’s visit and conversations with Sheila has made Taylor wonder about her former rival. Taylor seems sincere in offering help to Brooke, who turned down her still-perceived rival flat.

Ridge’s arrival at the Logan mansion included witnessing an unexpected and highly unusual sight. He saw his two great loves standing in the living room.

Taylor was upfront, saying that she was aware that Brooke was going through an undefined something and was purely there to offer assistance. Ridge knew it was best to practice preemptive defense and quickly ushered Taylor out of Brooke’s house.

Ridge has begun confiding in Taylor to a certain degree. Taylor is smart and might learn what is happening with Brooke through subsequent conversations with Ridge. Add Sheila into the soap mix, and the anticipation of this reveal is building.