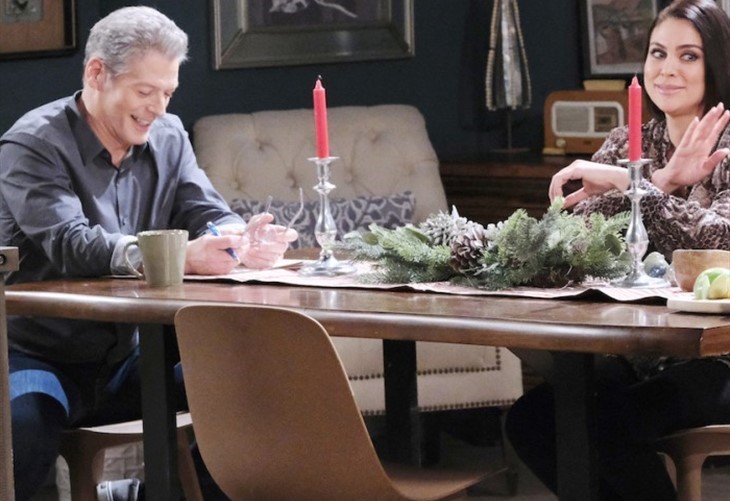 Days of our Lives (DOOL) spoilers teases that a fan fave couple are back in Salem and their storyline is “groundbreaking.” Kevin Spirtas and Patrika Darbo are back as Craig Wesley and Nancy Wesley, the parents of Nadia Bjorlin’s character Chloe Lane.

Spirtas recently talked Soap Opera Digest about his comeback and we have the dish for you here. Did he spill any major dirt on why the couple is back in Salem? Clearly he is enjoying his most recent stint as Craig, having been absent from the network soap since 2009.

“We’re like a family,” Spirtas said of his onscreen familia, Chloe and Nancy. “I got to see a lot of people.” But he noted that the set was safe via COVID policies and procedures: “We’re not allowed to mingle and not allowed to hang out together.”

“But we made it work and I loved seeing everybody.” There was another major change he noticed right off the bat.

DOOL Spoilers – Kevin Spirtas Is Back As Craig Wesley

According to the handsome and talented star, the cast is memorizing more pages than ever in a genre known for filming at a fast and furious pace. He said it gave his brain a good workout but he loved every minute of being back on set which included meeting new faces that weren’t there during his last network visit in 2009. He was in the Last Blast Reunion on the DOOL App in 2019.

Days Of Our Lives Spoilers – What Will Happen Next To The Wesley’s In Salem?

So, what are fans to make of the reason why the Wesley’s are back in Salem? “It’s a very uncommon story to see in daytime,” Spirtas previews, “but not in the world today.” He went on to say that Craig has a major decision to make and, “What’s amazing to me is that they were able to create this story out of a 30-year relationship.”

As fans are aware, Nancy dropped in unannounced last week to tell Chloe that Craig is cheating on her. Chloe was incredulous but Nancy was insistent. According to Spirtas, Craig’s decision has to do with honoring his commitment to himself and it will bring him peace of mind. Tell us what you think happens next for the Wesley family, DOOL fans!